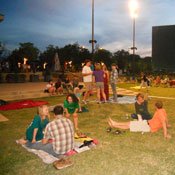 The crowd enjoyed lounging in the Art Garden at the Mississippi Museum of Art before the Crossroads Film Society presented "The Goonies" during the first "Screen on the Green."

I tend to adhere to the rule that if you're old enough to have experienced a trend the first time, you shouldn't wear it the second time around. Case in point: This season's colored denim trend sends me straight back memories of fifth grade and an awesome pair of salmon-colored Guess jeans that I loved. While ordinarily I would have bypassed any bright denim this go-round, the good folks at Red Square Clothing (1000 Highland Colony Parkway, Ridgeland, 601-853-8960, http://www.redsquareclothingco.com) persuaded me to break my rule and try it again as an adult. It's true: Sometimes reliving some of the things that were popular in our youth is a lot of fun.

The Mississippi Museum of Art and Crossroads Film Society (http://www.crossroadsfilmsociety.com) presented another perfect opportunity to do just that with the first installment of the free "Screen on the Green" series in The Art Garden (380 S. Lamar St., 601-960-1515). What could be better than a perfect Friday evening in spring, a cash bar and "The Goonies" on the big screen?

My friends and I gathered a blanket and some bug spray and were in the garden quicker than you could say, "Goonies never say die!" While some in the crowd were, like us, clearly excited by a movie from their formative years, we were joined by families with kids who ran around enjoying the great green space of the garden.

Maybe it was the wine, or maybe it was happy fullness from the Pizza Shack (925 E. Fortification St., 601-352-2001, http://www.thepizzashackjackson.com) pizza that constituted our "picnic," but eventually my cohorts and I sort of abandoned the movie in favor of just enjoying each other's company. We lingered well after the movie ended to soak up more of the springtime air. (The "Screen on the Green" series continues throughout the spring months; a full schedule is available at http://www.msmuseumart.org.)

In addition to movies like "The Goonies," birthday parties at the skating rink were a big part of my childhood. Recently, I talked to a member of the Magnolia Roller Vixens, one of Jackson's roller derby teams. I became intrigued and then convinced that I must attend a bout. Granted, I knew my childhood experience skating around the rink to Michael Jackson songs would be nothing like these tough ladies on wheels, but that only made me want to see it more.

The Vixens' home bouts take place at the Jackson Convention Complex (105 E. Pascagoula St., http://www.jacksonconventioncomplex.com), and since nothing says "date night" like watching a bunch of ladies careen around a rink and knock each other around, that is exactly what I suggested for Saturday night. I had no idea what to expect, but the Vixens exceeded any expectations I might have had.

The bout takes place on the same level as the spectators with no real barrier. The seats in the first row are for the more adventurous in the crowd; they come with the possibility that a derby participant might come crashing into you. (I was perfectly fine with sitting farther back.) Speaking of adventurous crowd members, apparently some of the bouts have a theme, which I didn't realize until I noticed a number of spectators in Star Trek costumes. Then I noticed a sign reading "Star Trak."

In my world, a good pun is always appreciated, and I give these folks points for really owning it. Lots of supporters wore the team's color, a bright blue. Coincidentally, I'd just painted my nails that color, so I felt in the spirit of things, too.

As a first-timer at the derby, I was glad when, prior to the bout, the announcer explained the rules and the teams demonstrated a jam (the two-minute increments that make up a half). And then they were off.

Y'all, it was kind of amazing: These girls are fast on those skates, and I quickly found myself pulled into the excitement. The Vixens' next home bout is April 21, and a complete schedule is on their website (http://www.magnoliarollervixens.com). It's well worth the price of admission. And because, dear readers, you know I care about these things, I feel compelled to add that you'll find adult beverages available.

So there you have it: Ways to revisit some of the good memories of your youth, but with an update (and bars). For my part, I don't think I'll be donning any acid-washed jeans or big bangs anytime soon, but the neon nail polish may stick around for the spring.