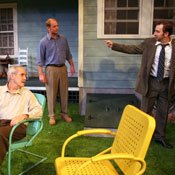 Laurie Pascale as Kate Keller, John Maxwell as Joe Keller, Bret Kenyon as Chris Keller and Daniel Dauphin as George Deever in "All My Sons" at New Stage Theatre, April 17 to 29.

Entering New Stage Theatre for its production of "All My Sons" by Arthur Miller, you are transported back to 1946 and the post-World War II Keller family homestead. The Kellers live in a gorgeous two-story house painted pale blue with cream-colored trim. An inviting porch is attached to the house. To the side of the house is a trellis covered with vines, and luscious trees grow in the background. The production team even managed to "grow" grass on the stage to enhance the realism.

This extraordinary set will make viewers feel like they are watching their neighbors instead of watching a performance. "With the quality of what you are seeing and the production values here and the talent, I think the audience is really going to see something special," director Russell Blackwell says.

"If we can be as solid as the set construction, then we are going to be just fine."

After just three weeks of rehearsal, the actors are transforming into an intricately woven community. Blackwell says that the Jackson area has "a fine talent pool of performers ... and we have a bunch of them in this show."

The cast includes five Jackson locals: John Maxwell, Bret Kenyon, Joseph Frost, John Howell and Ali Dinkins. Three other members from the cast are from surrounding areas: Courtland Nobles, Daniel Dauphin and Jo Ann Robinson. New Stage not only attracts local actors, but also actors from out of state. The "All My Sons" cast also includes Laurie Pascale from Arkansas and Kristin Patton, from New York.

"Arthur Miller created it," Blackwell says. "We come out here to try to keep the magic and be true to what Mr. Miller wrote and tell his story the best we can."

Theater goers may know Miller's work through plays such as "Death of a Salesman" or "The Crucible." Like those plays, "All My Sons" is an extraordinary piece of art.

"It's an American classic," Blackwell says. "We try to bring our own form of jazz to it. Anyone can play the notes, but it is what is in between the notes. What (actor John Maxwell) sees as Joe Keller, someone else may not have seen."

"I try to live through the moment of the play; through what the character wants and what his objective is," says Maxwell, who plays the father, Joe Keller.

"I'm not trying to portray anyone; I am trying to live through those moments to make it as real and close to the truth as I can."

By using this technique, the performances are more natural. The actors respond to the situation instead of pretending to be something they are not.

Many acting companies perform "All My Sons," and each one brings something special to it. The New Stage company is trying to bring the audience back to 1946 for a couple of hours to give them the best experience possible.

One reason for the play's long-term success is its universal themes.

"It's life; it's family," Blackwell says.

"It's how one family deals with love, with loss and human nature. And the backdrop is World War II."

Even though the show was written about 65 years ago, it still makes an impact. "That's one thing about Arthur Miller—most everything he wrote has a timeless quality, a prophetic quality," Blackwell says. Maxwell adds: "I think that's what makes great plays great. No matter when plays are written, an audience is going to be able to identify."

Blackwell agrees. "I want people to leave wanting to come back to the theater," he says. "It's our art. More art means a better place that we live in."

See New Stage Theatre's performance of "All My Sons" from April 17 through April 29. Curtain is 7:30 p.m. on Wednesday through Saturday and 2 p.m. Sundays. Tickets are $25 with discounts available for students, senior citizens and groups. For more information, call 601-948-3531 or visit http://www.newstagetheatre.com.