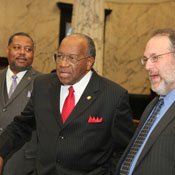 Following one of the hottest Senate debates of recent weeks, Mississippi's constitutional amendment to require would-be voters to prove their identities at the polls, inched closer to realization this morning.

More or less a technicality because voters gave it the thumbs up in a statewide ballot question last fall, HB 921 is the legislative vehicle needed to implement the controversial law. The measure, already approved in the House, passed the Senate 34-14 and now heads to a conference committee.

The U.S. Department of Justice has to sign off on changes to Mississippi's voting laws, and it remains unclear how the DOJ will evaluate Mississippi's law. In 2005, Republican President George W. Bush's administration let Indiana's voter ID law stand. The U.S. Supreme Court upheld the state's law in 2008.

Sen. Chris McDaniel, R-Ellisville, defended the bill, saying that it was not "some kind of mischief" to turn back the clock on civil rights gains for blacks. He noted that the Mississippi Senate is more diverse than it's ever been. McDaniel, however, acknowledge the irony that resistance to voter suppression and intimidation efforts led to more blacks winning elected office in the state.

Sen. Joey Fillingane, R-Sumrall, who drafted the fall voter ID initiative, said voter ID is needed since evidence of voter fraud exists from as recently as 2007. During the 2007 Democratic primary election for circuit clerk in Jefferson Davis County, the losing candidate, Clint Langley, challenged the election results in court amid allegations of voter fraud.

Circuit Court Judge Forrest Johnson invalidated those results original results after uncovering 26 irregularities, which included one vote recorded in the name of a man who'd died and another in the name of a person who was hospitalized in another county.

"We beat you every time. We're gonna beat you this time," Jones said.

I guarantee you that 95% of those irregularities cited in that case were due to clerical errors and not intentional voter fraud. The road to voting precincts in Mississippi is stained with the blood of those who were jailed, beaten and often killed in the name of voting rights for African Americans. Our legislators should be working to ensure that the process is easily available to voters rather than place more restrictions or requirements on my ability to cast a vote.

Sorry...still not seeing it. None of my black friends have any problem with this (true, they are all highly educated people). There has been no clearly stated position how failing to obtain an ID is a by-product of intentional disenfranchisement of one group over another. To me, the only group of people in this country who are truly disenfranchised are those under the age of 18 who work and, therefore, pay taxes.

@833WMaple I agree that those irregularities cited ahre due to issues other than voter fraud. It was proved in other States who have attempted to do the very same thing, suppress the vote of certain democratic supporters. Let's be clear and totally honest, if President Obama were not in office, there would not be a single word said from any of these folks claiming to be soooooo concerned about people voting illegally. Republicans all over the Country are saying that their goal is to defeat Obama. They do not give him the title of "President". Their message translates into: Gt him out by any means necessary.

Darryl, what about the other issue? How do you feel about costly regulation with no basis? And if you aren't bothered by voter ID, I assume you're cool with more gun regulation -- considering that there is actual evidence showing that it could keep more people alive? Because I know you couldn't possibly decide that passing a law that *could* hinder a person's ability to vote is not more important than passing laws that *could* keep more people alive. That wouldn't be logical (unless you have an ulterior motive), and I know you must be just as smart as all those smart black friends of yours who agree with everything you say when they come over for dinner at night.

I'm with Darryl. I don't see how showing an ID to vote is an unfair burden on anyone, when it's required for so many other things. It's hardly Jim Crow. Although, it's hard to make a case for a new law when there isn't really any compelling evidence to show widespread voter fraud in a way that this law would even address. There is probably much more voter fraud with absentee voting. SOS Hoseman had a bill that would address that but it died I think. @833WMAPLE~ How exactly could you guarantee that? @Justjess~ You really don't believe that Republicans would try to defeat a Democratic incumbent if they weren't black? Really? @DonnaLadd~ I'm sure you know that you already do have to show ID and go through a background check to buy a firearm.

WMartin, Never before in the history of this country has any President been so negatively evaluated and cruely treated as President Obama. He was called a "liar", a socialist, a communist, a fraud, Muslim, not born in America, and the list goes on. He and his wife were pictured with Michelle draped in bullets with an Angela Davis afro: He was in African dress with a bone in his nose. There have been many references to President Obama and Hitler. I still can't get the picture out of my head of Jan Brewer, Governor of Arizona, shaking her finger in his face. This was the ultimate in disrespect and disregard! Of course I believe that Republicans will and should try to defeat ANY Democrat during the electorial process; however, once the winner is declared through a majority vote, GOOD AMERICANS act as GOOD AMERICANS; giving dignity and respect for the Office and Office holder of the Presidency.

@justjess~ I know you are sensitive 'cause he is your candidate of choice but a little perspective is called for. He has not received any more negative treatment than any other President. A lot of folks are making the case that the mainstream press has gone easy on him because he is their candidate too. Lampooning and negatively attacking Presidents and presidential candidates is actually a great American tradition. Stephen Douglas called Abraham Lincoln a "Black Republican" and Lincoln's ancestry was repeatedly questioned. There have been brutal caricatures of every President before and since. And remember, the fringe blamed George W. Bush for 9/11 and it's hard to get more negative than that.

I will have to admit that Bush wasn't given an easy ride by some people, but he did not have the level of blatant disrespect from the media, legislators, governors and others that has been leveled at President Obama. Heck, people blame Obama for an economic collapse that happened more than a year before he was even elected! At least the things Bush was blamed for actually happened on his watch, while he had majority control in both houses of congress for 6 of his 8 years. Obama is having to deal with divided congress and a Republican party that is more obstructionist than anything else, with a publicly stated goal of doing anything they can to destroy the President. (isn't that treason?)

Bobby- No that's not treason, want to over-throw the government would be treason, wanting to destroy Obama so he doesn't get re-elected is just normal politics.

Ms. Ladd, I believe that there are a great number of laws on the books that could be stricken today and no one would miss them. They were placed to address an issue that, over time, failed to continue to be an issue. Personally, I feel that the issue of voter ID is way past its time. I was in favor of "Motor Voter" back in the 90's. As I've said in this forum before, I would be staunchly in favor of gun registration. I realize that you are asking a different question than what Mr. Martin attempted to answer and, yes, I would be in favor of that. Personally, I feel that if someone owns a firearm, the owner, make/model/serial number and ballistics of that weapon should be on file to help law enforcement. To JustJess...voter ID has been an issue in Mississippi politics for >20 years. Obama hasn't been more lampooned than any other president. The only one given a somewhat free pass was FDR (but we were a little busy at the time, dontcha think?) and he didn't escape it entirely. And, who else are the Republicans going to target if not an incumbent Democrat? And, to address your snark, my friends (white or black or oriental) are too smart to agree with me all of the time, as I fail to agree with them all of the time. Our opinions are our own, and not derided. And, apparently, I'm just about against anything that comes out of Andy Gipson's mouth...

@BubbaT - Normal Politics does not include willingly, even eagerly, damaging and restraining the economy, infrastructure and social structure of the country in order to get your party into power. Everyone who thinks it does is part of the problem.

@BobbyKearan There is a deifference between "destroy" and "defeat". BobbyT's suggestion that wanting t "destroy" President Obama is from his own personal definition and hasn't anything to do with the fact that this President has had more threats of murder on his life than anyother in this Country's history.

Voter ID laws give authority and power to poll workers & precinct workers to deny a person that is duly registered the opportunity to vote. And I'm smart enough to know that type of power in the hands of the wrong people will be abused. And the voter will leave the precinct without casting their vote, and if they are not as highly educated as your friends (@Darryl), then they will not know how to remedy that problem. You see, I know people from many backgrounds, income levels and ethnic groups, who will stay at home rather than be embarrased if they don't have the proper ID. Perhaps they have had their license suspended for non-payment of child support - this probably applies to alot of men. Does this mean they have lost their right to vote? And so now what becomes the acceptable form of ID for them?