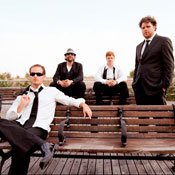 DrFameus is the electronic music side project of the Disco Biscuits' drummer, Allen Aucoin. The Disco Biscuits began gaining national attention in 1998 while pioneering the distinctive sound that would come to be known as trancefusion. The band formed at the University of Pennsylvania in 1995 and counts among its influences not only jam and psychedelic rock giants such as the Grateful Dead, Phish and Pink Floyd, but also the trance and house music heard in dance clubs at the time.

In 2005, drummer Sam Altman left the band to attend medical school leaving big shoes to fill, and Georgia native Allen Aucion stepped in to fill them. After six years with the Disco Biscuits, Allen is no longer the new guy. He not only filled those shoes, but brought new life to the band.

Right now, with the Disco Biscuits between tours, Allen is touring as DrFameus. While the Disco Biscuits' music is hard to define as rock or electronic, DrFameus' sound is most assuredly electronic, but no easier to classify. As his website states, the music ranges from "breakbeats to drum 'n' bass to dubstep to techno/house." And while his skill with the laptop is impressive, it is his skill as a drummer that makes him stand out from other electronic artists. With the precision of a machine and the energy of a man filled with a passion for rhythm, Allen lays down beats you wouldn't think humanly possible.

Combine his apoplectic drumming with laptop-triggered sounds, and you get a unique blend that is his own take on whatever genre of electronic music he is tackling at the time.