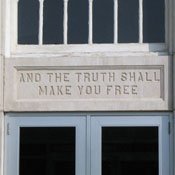 When Rush Limbaugh called Sandra Fluke a slut, it was clear he was using a pejorative term. He meant to belittle Fluke, a law student at Georgetown University who spoke before U.S. House Democrats in support of birth control. Limbaugh is a showman, not a journalist, yet his language created a backlash for the outspoken conservative radio personality.

But it's not just the Rush Limbaughs who use language to degrade and insult. As politicians throw around emotionally packed words on the attack, some journalists wind up repeating them. Before long, some reporters and editors start assuming the pejorative term is an acceptable way of describing something. It's kind of like how Xerox lost its power when everyone started using the trade name as a common noun and verb. Google it.

Sometimes these things happen organically as language evolves. Other times, calculated measures try to speed up the way we talk and think. "Obamacare," a term Republicans coined, is such a creation. It refers to the Patient Protection and Affordable Care Act that the president signed in 2010.

Richard Prince of the Maynard Institute watches how journalists use words like "Obamacare." In his column, Richard Prince's Journal-isms, he recently pointed out that The Washington Post started using the word without quotes. Specifically, the paper used it in a headline. He contacted the Post's managing editor, who told him the newspaper avoids the term "Obamacare" in its front news section. Prince also talked to the Associated Press, The New York Times, The Chicago Tribune and The Los Angeles Times.

Editors told Prince that "Obamacare" came from one side of the political debate, which is why it is not a good word to use in a news story. Most times, the term shows up in columns and letters to the editor. Some of the papers only use it when quoting a source. For example, some stories quoted the president using the term: "They call it Obamacare. I do care, that's right," Obama said in October.

Prince noted that conservatives who opposed health-care reform had been using the term regularly, hoping it would become second nature to journalists. They had a strategic plan to introduce it as the de-facto shorthand for the wordy Patient Protection and Affordable Care Act.

Using terms like "illegal alien" are deliberate political ploys to evoke negative emotions. Editors and reporters who use the repeated phrase without thinking become accomplices to hate. It's hard to believe that wordsmiths could be so careless or so easily led.

On the conservative side, complaints about the so-called "liberal" media continue. The infamous Internet prank to change the meaning of the name Santorum to something beyond nasty is clearly mean. Pro-business forces say it's pejorative to use terms such as "pink slime" to refer to the meat byproduct substance that companies produce.

It's a challenge for a writer to describe something accurately and precisely so that anyone can understand the context and maybe learn something new. Journalists are generalists who depend on many experts to explain complicated processes and terms. They then have to condense that information and often rely on publicists and other shortcuts to help them get there by deadline. Journalists demand (when they are feisty) that people explain their jargon and drop the shoptalk. Smart journalists treat political buzzwords the same way. Call something by its simplest correct name and not the invented term meant to diminish others.

Journalists strive to be "objective," but if you ever meet a reporter or editor who swears they are totally objective, they are lying. No one is totally objective. Whether we grew up in Mississippi or can't afford gas, it finds a way in our reporting. All we can do is endeavor to be honest and clear and open to criticism.

Before Fox News stole the phrase and twisted its meaning, most journalists sought to be "fair and balanced," a long-standing journalism ethic. Recently, National Public Radio released a new Ethics Handbook (http://ethics.npr.org) for its reporters to be "fair to the truth," rather than what Jay Rosen, a media critic and New York University journalism professor, calls "he said/she said" reporting. He's not the only one—it's an old phrase similar to "knee-jerk journalism" (a pejorative phrase). Rosen says NPR's new ethics policy steps beyond that hackneyed formula for reporting that, in the end, tells the reader nothing.

Here's how NPR is rising above such a low standard: "We report for our readers and listeners, not our sources. So our primary consideration when presenting the news is that we are fair to the truth. If our sources try to mislead us or put a false spin on the information they give us, we tell our audience."

May we all be fair to the truth.