A Glimpse at History 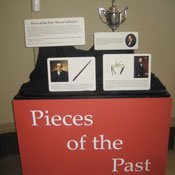 "Men of Influence" is on display through April 8.

Having just had to sell one of my children to pay for entry into the Insectarium in New Orleans, I'm all about a free museum, and we are blessed to have a good one right here in Jackson. The Old Capitol Museum, located at the intersection of Capitol and State streets downtown, is well worth visiting on a regular basis. One could spend the day just admiring the building, much less the displays it contains.

The museum always features exhibits that highlight aspects of Mississippi's rich and varied history. On display now is a small exhibit called "Pieces of the Past: Men of Influence," with only three items. But each—a pen, a teapot and a pocketknife—is a fascinating look into the past.

Secretary of the Interior Lucius Quintus Cincinnatus Lamar (oh my, one wonders what his friends called him) used the pen to sign his letter of resignation in 1888 when President Grover Cleveland nominated him for the U.S. Supreme Court. Lamar is the only Mississippian in history to sit on that court.

Edward Cary Walthall was a major general in the Confederate States Army and a U.S. senator from 1885 to 1894. It is his silver teapot on display. With its intricate inlays, it was obviously for use in formal settings.

Then there's the pocketknife—no ordinary pocketknife, but a Swiss army knife lookalike with attached corkscrew, saw, hook and even a small pair of tweezers. Jefferson Davis—Mississippian, Army colonel, member of the U.S. House of Representatives and the U.S. Senate, Secretary of War under Franklin Pierce and, finally, president of the Confederate States of America—owned it.

The exhibit is a quick look into the past, but it's worth the visit to the museum. "Pieces of the Past: Women of influence" goes on display April 24.

The Old Capitol Museum (100 S. State St.) is open Tuesday through Saturday from 9 a.m. to 5 p.m., and Sunday from 1 to 5 p.m. It is closed Monday. Visit http://mdah.state.ms.us/oldcap for information.