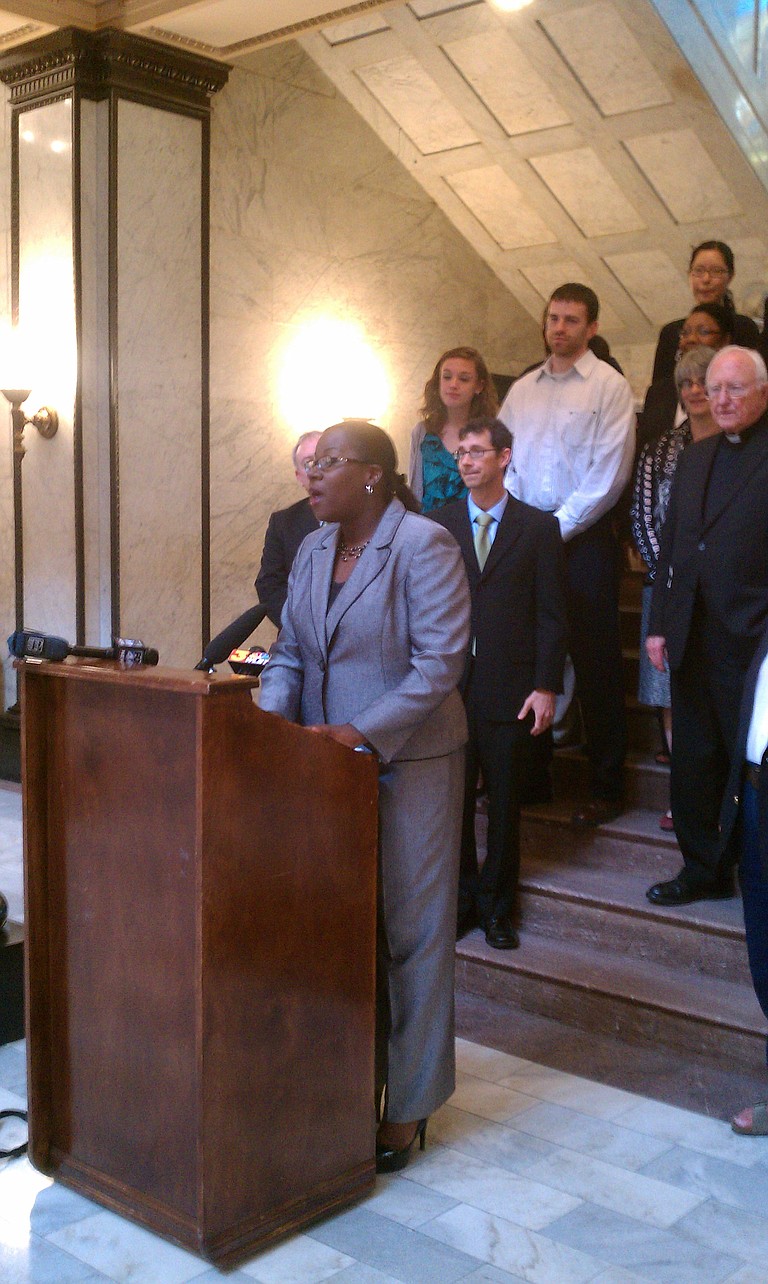 Pahaedra Robinson of the Mississippi Center for Justice spoke against House Bill 1396 at a press conference this morning. R.L. Nave

Anyone with a television has seen the ads common this time of year inviting people to apply their income-tax refunds toward everything from bedroom furniture to big-screen TVs. The businesses behind the ads are often consumer-finance companies that make small loans with higher-than-average interest rates to people who wouldn't otherwise be able to afford the purchases.

Those people could get hit with even higher fees under legislation pending in a state Senate committee. House Bill 1396, which passed the Mississippi House of Representatives in March, establishes the Consumer Installment Loan Act, raising the interest cap from current levels of 36 percent to 99 percent.

Paheadra Robinson of the Mississippi Center for Justice acknowledged that businesses are looking for ways to shore up profit losses taken on during the economic downturn, but characterizes the effort to establish the act as coming "at the expense of working families."

The Mississippi Economic Policy Center analyzed how the additional "squeeze" would affect borrowers. On a typical $1,500 loan with a 24-month term, HB 1396 could increase the cost of repaying the sum, including interest and fees, by $884.88--or $37 per month.

Steve Castille, with the Mississippi Religious Leadership Conference, said he's looking for senators to have a conscience when the bill comes up for consideration.

"It's taking resources, not from the rich to the poor, ironically, but from the poor to the rich," Castille said.

"This is nothing but a greed bill," Tobin said.

Castille is off base. This doesn't take anything from anyone since the people buying the furniture or TVs or whatever are doing so by their own accord. And I would like to ask the good Rev. Tobin if it's our legislature's job to legislate morality? If it is, then certainly adultery, pre-marital sex, etc should all be on the legislatures worksheet too?

Castille is off base. This doesn't take anything from anyone since the people buying the furniture or TVs or whatever are doing so by their own accord. That may be true, but this is still taking advantage of people, epsecially when you consider that many of them can't get loans through traditional banks. Having said that, if I wanted to buy a TV, I'd just save up the money than having to go through a payday loan service.