Back Roads of Righteousness 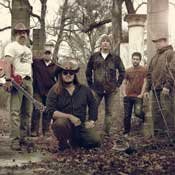 While The 484 South Band claims to have started in 2005, it really began 20-something years ago in the small paper-mill town of Monticello, Miss. There, two local boys, Jim Oakes and Keith Schultz, roamed the high-school halls doing what many south Mississippi teens do at that age: flirt with girls, ditch class, and drive on the back roads with classic rock and country blaring from the car stereo.

Oakes went on to raise a family in Monticello, becoming a teacher and artist (he designed CD covers for bands such as The Juvenators, Cary Hudson and John Stirrat of Wilco fame). Schultz became a successful chemical engineer and musician in Baton Rouge, La. But their childhood friendship and their love of music never waivered.

Schultz and former south Mississippian Twain Pigott started the band in 2005, and they performed in various venues in the Baton Rouge area. With their popularity growing, the band did, too. Pigott and Schultz, both guitarists, added Oakes and Brady Bagwell as vocalists, the late Don Hull on bass and David Johnson on drums.

Once the lineup was intact, the band successfully collaborated on their 2009 debut album, "Mississippi Nights," recorded at Route One Recording in Monticello, and co-produced by indie-music engineer Chris Hudson, co-owner of Black Dog Records. Hardcore outlaw-country and southern-rock enthusiasts graciously received the album, and it continues to climb the charts on CDBaby and iTunes.

When "Mississippi Nights" was released to the public, The 484 South Band had the opportunity of opening for the Eli Young Band, performing for the thousands of marathon runners at the New Orleans Rock and Roll Marathon, and being the headlining band of the Atwood Music Festival in Monticello. The band is headlining the Rockin' Railroad Festival in Hazlehurst Oct. 1, and its highly anticipated sophomore album, "The Backroads," has a tentative release date in December of this year.

While The 484 South Band's lineup has made some major adjustments (in 2010, Pigott and Bagwell left to spend more time with their families, and Hull died unexpectedly), the band has never faltered or tried to call it quits. With fresh, new "best-kept-secret" kinds of talent like Phil Cangelosi on vocals and guitar, Sidney Babin on bass and Andrew Price on rhythm guitar, The 484 South Band is barreling down the back roads of righteousness, preaching the verses of the artists who inspired them to make real music—and, of course, a dash of south Mississippi hell raising for good measure.

Please come out to support Mississippi homemade music and musicians (who are incredibly talented and the nicest guys ever). Visit http://www.jfpmusic.com for more acts playing in and around Jackson.

And please continue to send your music listings as far in advance as you can to [email protected] The more notice I have for your performances, the better chance you have for being chosen in our "Eight Days" section.

Stay classy, Jackson, and if you see me out and about, please say hello!