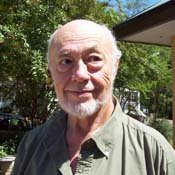 "It's the theater of my heart," Rider told the Jackson Free Press this morning. "I'm delighted to be back."

Rider, 76, became New Stage Theatre's first artistic director in 1979. He was living and working in New York City when a contingent from Jackson came to interview him for the job. He took it, thinking he might stay in Mississippi for a season or two, but wound up staying for 13 years.

"It was a major part of my professional life," he said.

He's enjoyed working on "Driving Miss Daisy." Before this production began, he only knew the material from the popular 1989 movie. At first, he thought the production might only include three actors and two stools. It does only have three cast members, but the New Stage design crew and technical staff have created many scenes beyond just a couple of stools on the stage. "It is a more involved production," Rider said.

The three cast members are Shirley Simpson of Florida, Jay Unger of Clinton and Ray McFarland of Jackson.

Now retired, Rider lives in Houston, Texas, but comes back to New Stage and to Jackson about once a season. His most recent productions are "The Ponder Heart" and "Red, White, and Tuna." Now living in Houston, Texas, Rider also has directed at many regional theatres including The Alley Theatre, Dallas Theatre Center and the Shakespeare Festival of Dallas.

He attended Baylor University in Texas and graduated there in 1957. His professional career led him to New York before he headed back south.

Rider is not sure what his next show with New Stage might be, but he is certain he wants to direct another play in Jackson in the future. "I hope I get invited back again."

New Stage Theatre opens its 46th season with "Driving Miss Daisy" Sept. 13-25, 2011. See a preview today at 7:30 p.m. Curtain times and dates for all other performances are at 7:30 p.m. Wednesdays through Saturdays, and 2 p.m. Sundays. Tickets are $25 with discounts available for students, senior citizens and groups. Tickets are available at the box office, located inside the Jane Reid Petty Theatre Center, by phone by calling (601) 948-3531 or online at http://www.newstagetheatre.com.

Mr. Rider is one of the great directors of our time. Playgoers should count themselves lucky that he's returned to Jackson and is willing to share his considerable talents. Thanks also to the powers-that-be at New Stage for hiring such a fine director!!!