Sargent Plans for Future of JPS 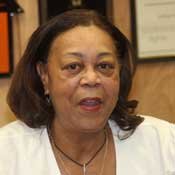 Jayne Sargent, interim superintendent at JPS, said she is working to ensure a quick transition when she retires.

Interim Superintendent Jayne Sargent will only be at Jackson Public Schools for six months to a year, but she is working on technology and curriculum changes that will help the school system in the future.

Sargent spoke at today's Friday Forum at Koinonia Coffee House, where she responded to questions about high dropout rates and children reading below grade level.

"All of it isn't about money," Sargent said.

JPS has many different reading, spelling and phonics curricula in place that Sargent is in the process of figuring out what works and getting rid of what doesn't.

"We have habitually added more on, but haven't thrown anything out," she said.

Sargent said she is working closely with Deputy Superintendent Wilbur Walters so that he can help the next superintendent transition into her job next year and carry over some of the practices Sargent is putting into place, such as technology in some schools so students can watch videos of classes they miss.

The function of the central office is to make schools better, Sargent said, which includes training teachers to better help their students.

"The only way we can truly make a difference for all the children in our state ... is through pre-K programs," she said. "... The children are hurt and are behind when they enter kindergarten in our schools in some communities."

Clinton, Rankin and Madison county schools will soon face some of the same problems with student achievement that JPS does, Sargent predicted.
"Problems don't go away because you move," she said.

Businesses and parents can help JPS by using their resources to help solve some of the school district's problems, Sargent said, whether they are involved in a formal organization like PTA or not.