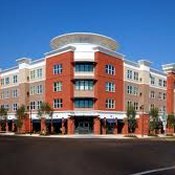 One University Place is just one place in the metro that has welcomed new businesses recently.

The Penguin, a restaurant at One University Place, will have its grand opening this Thursday at 3 p.m. The restaurant (1100 John R. Lynch St., Suite 6A) serves a casual lunch menu with daily specials and more sophisticated dinner entrees, such as duck a l'orange and steaks. A reincarnation of a restaurant that was located in the same area in West Jackson that closed in the early 1980s, The Penguin is open Monday through Saturday, from 11 a.m. to 11 p.m. Visit thepenguinms.com or call 769-251-5222 for information.

The City Council approved grants yesterday for three small businesses in Jackson to buy equipment and technology. Brent's Drugs (655 Duling Ave.), Myers Insurance Group (4915 Interstate 55 North, Suite 206 B) and The Copper Iris Catering Co. (115 N. State St.) will receive up to $5,000 to $10,000 each under the Small Business Development Grant program.

Mayor Harvey Johnson Jr. said business owners can use the grant money to purchase equipment such as cash registers. The program has been around since 2004, and 24 businesses received grants last year, according to a statement from the city.

The program is competitive, and businesses must provide a 25 percent spending match to be eligible. For information, call 601-960-1055.

The Fondren Association of Businesses is warning merchants in Fondren about a phone survey claiming to be from FAB. David Waugh, president of the association, said some businesses had received phone calls from someone claiming to be with FAB, although the board of directors had not authorized a survey.

Waugh does not know what information the person claiming to be with FAB was trying to collect, but is asking businesses not to respond to the survey. Waugh said in an email to area businesses yesterday that he tried to call the phone number the call originated from, but it was not in service.

Businesses contacted about the survey that have any information about what the caller wanted can email Waugh at [e-mail missing].

Networking with the City

Businesses interested in getting a contract with the city can meet and greet officials and other business owners at a Doing Business with the City Networking Reception Dec. 8.

City staff will be on hand to discuss serving as a primary contractor, minority business certification, contract award procedures and other topics. About 250 people attended the event last year, according to a statement from the city, and officials expect more people to be at the reception this year.

Right on schedule: Clarion-Ledger publishes today what our reporters revealed yesterday (above). Just sayin': City of Jackson awards grants to small businesses Good they got around to it, though.