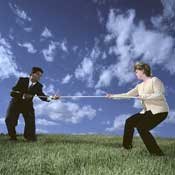 City and state leaders are debating whether a 10-member commission will have to oversee a proposed 1-cent sales-tax increase in Jackson. The city's roads, water, sewer and other infrastructure are in need of approximately $76 million in upgrades and major repairs, and the increase would fund that work.

The tax would not apply to retail sales of food at grocery stores and restaurants, or to hotel and motel rooms. Over the course of 20 years, the sales tax is estimated to raise $300 million.

In a May 2 memo, Jackson Mayor Harvey Johnson Jr. outlined Mississippi Senate Bill 2389, which mandates that a "local" chamber of commerce gets to appoint four members of the commission. Although the four members must own businesses within the city, they do not have to be residents. Mississippi's governor, lieutenant governor and its speaker of the state House of Representatives each get to appoint a single member to the commission, giving Jackson's mayor the power to appoint the three remaining members. The law also requires that the commission establish a master plan for all streets, roads, sewage and drainage repair.

Now, Jackson City Council members must approve the sales-tax initiative and put the tax to the citizens for a referendum vote. The tax needs 60 percent voter approval to go into effect.

In his memo, Johnson wrote that the sales-tax referendum vote should be submitted to voters only if the chamber gives its power to the city to choose the commission members. He added that the council should adopt an ordinance specifying how those members would be selected, and another ordinance defining the master plan and allowing the city to implement that plan.

"The term 'establish,' as used in the 2011 Act, would mean an adoption of a master plan submitted by the city without any changes by the commission," he wrote.

Some public officials such as Sen. John Horhn, D-Jackson, and Ward 1 City Councilman Quentin Whitwell claim that because the commission is not funded and its members can't hire consultants or engineers, its power is minimal.

"I think the city officials are looking for monsters where there are none," Horhn said.

"It would be in everyone's best interest if the city were to get this underway and demonstrate to the Legislature that the process is working, and then go back in two years and try to get commission removed."

Whitwell, who said the majority of his ward is against the increase, wants the city to go forward with the tax because he doesn't see any better solution to fund the infrastructure repairs.

"The mayor and council members are hung up on adoption of this optional sales tax, when the only other solution is to raise (water and sewer) rates by 400 percent," Whitwell said.

Ward 2 Councilman Chowke Lumumba, however, says that current law states the commission has the power to approve the master plan and funds, which oversteps the role of the city council.

"I'll be the first to admit that we need the money very badly," he said. "What is going to happen is that I'm going to try to look at the best plan we can get and make a decision based on that. I'm not going to compromise on principle. The principle is that the people should decide."

Lumumba added that Jackson's elected officials should have the ultimate power because they represent the best interests of people living in Jackson. He said he had not seen figures backing Whitwell's assertion that water and sewer rates would need to rise by 400 percent to fund the repairs without the tax increase, but is advocating that the city look into other financing options such as loans and more efficient water meters.

City spokesman Chris Mims said the mayor is still negotiating with the chamber over the appointments, but hopes to have the issue resolved soon.