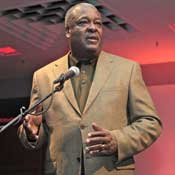 Jackson's outdated sewage treatment plant is dumping too much sludge and waste back into the Pearl River, and the city is paying big bucks to get it into federal compliance.

"What we're doing right now is sort of coming up with a plan of action that everybody can agree on," said Jackson Mayor Harvey Johnson Jr., who put three contracts totaling $1.4 million before the Council May 3. "We'll sign off on a consent decree (with the federal government) saying we'll comply with sewer system requirements. This will be a time-saver to do it, but we will have to invest the resources to implement it. Hopefully, this will get us to the point of having that document."

Johnson told the Council earlier this year that the city's aging sewer infrastructure and sewer treatment plant earned it a $240,000 fine from the Mississippi Department of Environmental Quality. The fine, Johnson said, is a one-time expense, but could be a recurring problem were the city not working out a deal with the federal regulatory agency.

Jackson City Attorney Pieter Teeuwissen said the U.S. Environmental Protection Agency was imposing its own fine on the city. Teeuwissen said he did not know the exact amount of the EPA fine the city was facing, but said the federal agency informed the city that it had likely "maxed-out" the agency's sliding scale for municipal violations.

The city must immediately address the amount of bio-solids collecting in its sewage lagoons in south Jackson. The lagoons serve as a repository for sludge as bacteria process it for re-entry into the Pearl River. However, the lagoons appear to be taking on more waste than they were designed to handle, and the city must finance its removal.

"You have to remove 81,000 tons of sludge," said Phillip Gibson of environmental engineering company Camp Dresser and McKee, which the city agreed to contract for $300,000 last week. The $1.4 million total payment on three different contracts with CDM, Chester Engineers and Waggoner Engineering last week is only the beginning of what will be a much greater expenditure as the city fights to get into federal environmental compliance.

"We've said all along that our water system might take $100 million to fix, and we still have a couple hundred million left on the sewer master plan. That's the floor (cost), and it could go up from that," Johnson told the Jackson Free Press. "Four-hundred million and $600 million have been thrown about, but we won't know a definite number on the sewer upgrades until we've completed our negotiations with EPA, and we won't have a definite number on water until we've upgraded our master plan."

Teeuwissen told a public forum last year at Koinonia Coffeehouse that the EPA was breathing down the city's neck regarding water-quality violations at the city's overworked wastewater treatment plant.

"We have a sewage treatment plant in south Jackson that was designed to treat 50 million gallons (of wastewater) a day. It went online in 1989, under (Mayor Dale) Danks' administration. That plant started exceeding its capacity within a year. Now we're 20 years down, and we're still exceeding capacity," Teeuwissen said. "The EPA has brought to the city's attention various alleged violations including the amount of sludge in the south Jackson sewage lagoons."

Although the population of the city of Jackson has been declining for decades, the growing communities surrounding the city, including municipalities in Rankin and Madison counties, rely on Jackson's water infrastructure and its single wastewater treatment plant for sewage processing. The exploding population of the suburbs is pressing the plant beyond its limit.

Adding to this is the federal government's increasing scrutiny of quality of water issues for freshwater rivers and streams. The Pearl River, for example, carries a finite amount of water and can be easily inundated with oxygen-killing bacteria from the city's sewage-treatment plant.

Johnson said that the city of Jackson is not the only victim of the nation's renewed war on pollution through jaw-dropping fines.

"There have been numerous violations across the country and these cities are in negotiations with the EPA and the regulatory agencies of their states. In most cases, it's a very expensive proposition," Johnson said.

Jackson's suburbs, which hold water and sewer contracts with the city, may see future increases in their contract prices to reflect the cost of water-system upgrades.

"We have contracts with our satellite users, and some of those users will be required to assist with upgrades, but we'll talk about that later, because we don't know the numbers," Johnson said. "We have notified them that we are in negotiations (with the federal government). As soon as we know something, we'll let them know something about cost-sharing."