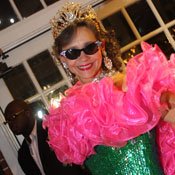 Jill Conner Browne was an absolute "hoot" at the BOOM Jackson Fashion Show in the fall.

Once a year, a group of women make a pilgrimage across the country to Jackson. Mostly middle-aged, they come decked out from head to toe in sequins, feathers and anything that sparkles. They've come in the name of their queen: the Sweet Potato Queen.

What began as a small affair in 1982 led by Jill Conner Browne has escalated to a three-day weekend full of events, parades, balls with corporate sponsorships and more queens than you can shake a stick at. With the enormity of the event that has become the Sweet Potato Queen weekend and the Zippity Doo Dah parade, one has to wonder what those early days were like and what the people who were there at the beginning think of the way their movement
has spread.

Sweet Potato Queen and Jackson attorney Cynthia Speetjens of Jackson was there at the beginning. She remembers meeting Browne in 1978 at her local YMCA where Browne was an aerobics instructor. Speetjens says Browne's students mostly made up the first group of four queens. They were women looking for an excuse to build a float and dress up.

"Back then, the outfits were just whatever we could find in the attic or at Goodwill that was green," she says. "As time passed, the outfits got bigger, hotter and more difficult to get in and out of. There was a slippery slope of foolishness going on there, and we all slid down pretty fast."

Wilson Wong, formerly of Jackson, remembers the first time he met Browne as well. He was managing his family's restaurant, House of Wong. Browne and her friends came in every Wednesday night for what they referred to as their "prayer meeting." As time went on, Browne and company were delighted to meet Wong's alter ego, "Lance Romance," a character Wong had developed waiting tables to entertain himself and his customers.

Wong found himself sitting around the table at his family's restaurant long after closing and heading to Browne's house with the rest of her friends after all the lights were turned out and doors were locked. Wong remembers Jill telling him, "Hal's going to have a parade, and we're the Sweet Potato Queens. Are you in?"

Without hesitation, he agreed. "I'm Lance Romance," he replied.

While the ladies were pulling on green Goodwill dresses, Wong donned a green T-shirt, knickers and knee socks, and Lance Romance was given a title: Official Consort to the Queens.

Speetjens and Wong both say they try never to miss the parade. Wong, a corporate organizational consultant who now lives in Atlanta, even flew into town while he was living in California.

After almost 30 years of great parade memories, Speetjens says one stands out in her mind.

"My mother was in her late 70s or early 80s when she started riding in the parade as a 'Used-To-Be,' and it was the highlight of her year," Speetjens says. "She was constantly photographed. People wanted her autograph, and some even remembered her from year to year and would hug her and have their pictures made with her. It was a huge joy to me to be able to give her something that provided so much love and laughter in the last years of her life."

Wong's favorite parade was the year famous novelty entertainer Tiny Tim served as Grand Marshal. Tiny Tim was supposed to ride on the float with the queens, but they were worried about his safety. The constant rocking and bouncing of the float as it made its way along the parade route, increased by the queens' enthusiastic dancing, looked like a recipe for disaster— they were terrified their guest of honor would be thrown from the float.

"We built him a throne that was essentially a giant high-chair and strapped him in," Wong says. "He was a really good sport about it and such a genuine person. He called me 'Mr. Wilson' all day, and I called him 'Mr. Tiny.' After the parade, we headed for the street dance, and while he was singing Jerry Lee Lewis, he invited us all onstage with him. He dropped to the ground and started doing 'The Gator.' It was great!"

The SPQ movement caught on fast especially once Browne's book, "The Sweet Potato Queens' Book of Love" became a national best seller in 2004.

"The following spring, the crowd looked like a ticker-tape parade for astronauts coming back from the moon," Speetjens says. "Word-of-mouth took over, and it continued to grow."

"I'm not aware of any other event in the country that truly focuses on middle-aged women; it's somewhat of a national deer camp on estrogen. The women come in huge groups, the overwhelming majority without husbands, and (because) there's safety in numbers, they really do get silly. A socially acceptable venue for silliness at that age is fairly addictive. I don't see many of them willing to give it up."

Wong attributes the event's popularity to the certain joie de vivre that Browne has breathed into the group since its inception. "It's about liberation of self and having fun without the shackles of everyday life," he says.

The Queen "herveryownself," Jill Conner Browne has spoken: "Other queens have come and gone, but Wilson, Cynthia and I will be doing this in wheelchairs and Depends!"

Did You Know?
• Sweet, salty, fried and au gratin are the four food groups, according to the SPQs.

• During the first parade, the queens rode around downtown Jackson in the back of a pickup truck and threw sweet potatoes to unsuspecting bystanders.

• Browne has published eight books outlining the Sweet Potato Queens' philosophy on subjects ranging from marriage and raising "chirren" to what makes funeral food so delicious and how to protect your "assets." (See page 23.)

• More than 6,000 SPQs chapters are in 20 countries across the globe. To start your own chapter, go to http://www.sweetpotatoqueens.com/chapters.