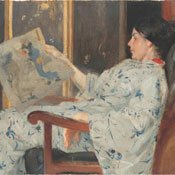 A woman lounges in "The Japanese Woodblock Print," a painting by William Meritt Chase, featured in "La Femme," a portion of "Orient Expressed" dedicated solely to Japanese fashions.

Walking into the Mississippi Museum of Art's "The Orient Expressed: Japan's Influence on Western Art, 1854-1918," you may kind of know what to expect, but you won't anticipate seeing 10 or so black rectangles lining the wall. The black felt-like fabric cloaks something, and like any person with a healthy sense of curiosity, you will probably want to lift the veils. What you will find is Felix Buhot's etchings on light-sensitive, yellow, handmade paper

Some of Buhot's etchings, of course, are more interesting than others, like "Ex Libris Papillon et Libellule," an etching of butterflies and dragonflies, and "Crapaud Bronze," an unusually interesting piece although it's merely an etching of three frogs. Buhot, however, is widely acclaimed for the intricate detail his work has with simple subjects like flowers, and especially frogs, so lifting the black fabric won't disappoint.

Ornate vases and plates encased in glass-lined walls sit in the middle of a section dedicated to an introduction of the exhibit. And just around the corner, curators set up the most delightful modern-day tearoom. A service for four sits atop small black mats that rest on larger bamboo mats in the middle of the hardwood floor. A pair of geta (the traditional two-teeth-bottomed wooden thong sandals) sits next to a pillow, inviting museum guests to slip them on and kneel on the pillow, like a geisha with the most pristine hosting manners.

In the corner where "Japonisme," a French-coined word to describe Japan's cultural influence on the arts, and its definition are neatly printed on the wall, everything you might expect to see is here: Bamboo shades, a parasol and kimonos hang along the wall. Right there, in the middle of the art exhibit full of signs that warn, "Please Do Not Touch," the museum offers exhibit goers an opportunity to make believe.

There is one other interactive element of the exhibition, too: an opportunity to make your own Japanese-inspired art by sketching an anime character (there's a step-by-step tutorial) and to make a wood-block print (the Japanese are widely known for their woodwork).

One of the most striking pieces of the entire exhibit isn't prominently displayed. John LaFarge's "The Strange Thing Little Kiosai Saw in the River" is a hauntingly beautiful watercolor on Japanese tissue paper that the artist then laid out on white woven paper. A woman's head floats in the river water, her lips tinted a dark fuchsia and her brunette locks swimming behind her.

If it wasn't for the delicate pink flower in the dark, murky water near the woman's head, you might assume the "strange thing" is that the woman is dead. But the flower makes you wonder if she's only resting.

Besides the art that hangs on the walls and the fancy tchotchke in cases, the exhibit boasts a parlor cabinet by A. and H. Lejambre. The artists so beautifully made the  cherry-wood cabinet, stained an intense black with olive-green silk velvet decorated panels on either side, it is difficult to imagine anyone using it store clothes or delicates, not to mention white athletic socks. It's a piece of furniture that may be functional (if one dares), but it's definitely art.

Then there's the style. From the first kimono--a short, navy-blue silk garment with white embroidered details--to "La Femme: Women, Fashion & Japonisme," the space allotted for Japanese fashions celebrates tradition and provides an admonition to modern women: There is seductive intrigue in modest dressing.

From brightly colored paintings of women standing with erect posture like "Woman with Peacocks" by Louis Rhead with its reds, blues and greens, to the leisurely woman in William Merritt Chase's "The Japanese Woodblock Print," where his subject lounges in a white kimono with subtle blue designs all over, women from the west hemisphere took the Japanese style, and made it their own.

During the exhibit, visitors learn that then-U.S. President Millard Fillmore sent Commodore Matthew Perry to explore Japan. In 1854, Perry went with considerable military force to introduce himself and the Americans to the seriously isolated Japanese. Considering their limited military, the Japanese allowed the Americans and their army on their soil, knowing European countries would soon follow. Printmaker William Heine travelled with Perry and documented the trip with his artistry. Heine's prints piqued the outside world's interest in Japanese art.

If you allow them, thoughts, "The West stole the East's art" could taint the exhibit experience, when you see names like Pierre Bonnard, James Sidney Ensor, and Henri Gabriel Ibels, and other French, English, and American artists in an exhibit with Japanese art.

Don't let them. Otherwise, when you reach the exhibition's final section "Kyoto Views," the works of Jackson-born, Tupelo-reared Randy Hayes, you will, undoubtedly, feel contrite, like a hypocrite. Hayes' modern pieces are simply amazing. There is no fancier or more accurate word to describe them. Mixing mediums and centuries, Hayes produces visually intriguing and thought-provoking work.

Take, for example, "Blue Fugue": The framed images of artists in the painting are Japanese for sure, but the entire work has a blues/jazz feel. There's even an image of Cab Calloway incorporated in the piece. In "Reflection on a Kimono in an Antique Shop Window," the artist mixes photography and oil on the canvas, as the large-scale kimono is super imposed on a collage of photographs of Japanese culture, from street to teahouse.

The "Orient Expressed" is an exhibit that reminds you of how, to say it colloquially, cool the eastern world is, while bringing to mind how invasive westerners were to learn of Japanese culture. It gives Mississippians one more artist to brag about in Randy Hayes and proves once again that you can find beauty in just about anything.