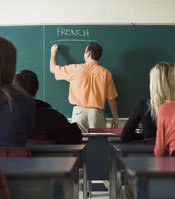 An upcoming revised revenue estimate for Mississippi could give public-education advocates and supporters some breathing room. The state Legislature's Revenue Estimating Committee met this week, and Mississippi Parents' Campaign Executive Director Nancy Loome says that an estimated increase in state revenue could help make the case for level education funding during upcoming budget negotiations at the state Capitol.

"The entire budget will be affected by that," Loome said. "Things were looking really good, as far that as revised estimate is concerned--except for gas prices; that could have a negative effect."

In a blow to Gov. Haley Barbour, the Senate approved a House-proposed funding amount for K-12 education that is equal to last year's appropriations and $81 million above the amount approved by the Senate Appropriations Committee.

Appropriations Committee Chairman Sen. Doug Davis, R-Hernando, ensured that the bill would go to a two-chamber conference committee for negotiations, however, by inserting an amendment that would repeal the bill before it even takes effect. Davis said on the Senate floor that a conference committee was necessary to prevent Gov. Haley Barbour from vetoing the bill.

Barbour released a statement criticizing the higher funding amount. Legislators fear that Barbour will veto all appropriations bills until both chambers agree on an overall budget figure. Barbour cited the lack of a budget consensus in his Mar. 3 veto of a community college funding bill.

Negotiations on the school-funding bill will likely not begin until after March 15, the deadline for naming negotiators to the conference committee. Loome said that she expects House members to accept the higher funding amount approved by the Senate.

"The House leadership had expressed its very strong support for standing firm even before it went to the Senate," Loome said. "With the (29-22) vote that they got in the Senate the other day, I would think that that would give them confidence that they could stand strong on their position."

The House- and Senate-approved plan would give $1.8 billion to the Mississippi Adequate Education Program, the state's primary means of funding school districts.

This is great news! Let's hope for more with less not being a part of the equation.