Of Fairytales and Drama 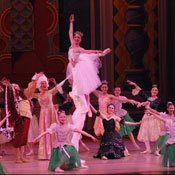 The children's tale "The Princess and the Pea" comes to life March 5, thanks to the Mississippi Metropolitan Ballet Company and the artistic direction of Jennifer Beasley.

Many children (and a few adults) wish their favorite children's story would come to life. Imagination is fun, but sometimes they just want to live the fairytales. Imagine no more, thanks to the Mississippi Metropolitan Ballet's production of "The Princess and the Pea."

In Hans Christian Andersen's story about a prince searching for his princess, wife-finding doesn't prove to be so easy for the young monarch. Every woman he meets proves to be not quite right, and he isn't so sure any of them are actually princesses. That is, until a young nymph who claims to be a princess, knocks on the palace door one stormy night, seeking shelter. To test her claim, servants pile mattresses and feather beds atop a pea, knowing only a princess would be disturbed by the miniscule disturbance beneath the bed.

Turns out, the young woman had a restless sleep.

The Mississippi Metropolitan Ballet and its artistic director, Jennifer Beasley, are known for staging "Beauty and the Beast," "Alice in Wonderland" and their annual production of "The Nutcracker." "Princess and the Pea" is new for them, and they are especially anxious about the production. The story is humorous and sophisticated, and Beasley and her team will use playful comedy, clever staging and creative choreography to bring the story to life.

Pulling the performance together hasn't been without its own drama, though. The company sometimes relies on out-of-town dancers to play the lead roles in shows, and "Princess" was no exception. Beasley had scheduled two dancers to dance the lead, but scheduling conflicts with the dancers' primary company forced them to bow out of the "Princess" production a mere two weeks before the opening of the show.

Beasley diligently contacted one company after another searching for replacements. Her persistence paid off, and a little less than a week after things went awry, Beasley found two up-and-coming dancers from Cuba who will carry much of the ballet's weight.

Mayara Pineiro and Etienne Diaz will dance the lead roles in "The Princess and The Pea" and "Le Corsaire," a classical ballet piece, the pre-intermission show.

Pineiro graduated from the National School of Ballet Arts in Cuba and is a former soloist with the National Ballet of Cuba. Diaz has danced in the United States for the past seven years, and in 2009, he joined the Orlando Ballet's second company. He also received the Bronze Medal in the Youth America Grand Prix.

The Mississippi Metropolitan Ballet is a place for young ballerinas to start their careers. Currently, 600 students between the ages of 3 and early 20s make up the academy. Five Mississippi dancers earned full scholarships to the U.S.A. International Competition Dance School, and three of those five were Beasley's students.

"The discipline that our dancers learn here with our school and our company carries them throughout their lives," Beasley says. "Whether they become a professional dancer or not, the rigorous training is what brings students coming back to say that the discipline they learned in ballet helped them be better students and better people as they go into their careers."

The Mississippi Metropolitan Ballet Company performs "The Princess and the Pea" Saturday, March 5, at Jackson Academy's Performing Arts Center. Production times are 2 p.m. and 7 p.m. Following the 2 p.m. performance, children will have the opportunity to meet the dancers at the Princess' Tea Party. Tickets are $18 and $20 and are available online at msmetroballet.com or by calling 601-853-4508.