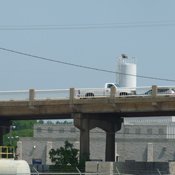 This morning, Johnson presented to the Jackson City Council a request for federal highway grant proposals to help finance much-needed repairs to the aging bridge, which the council approved.

The bridge is not in danger of collapsing anytime soon, having earned a 38.5 federal rating on a 100-point scale.

"We're replacing a bridge on Cedars of Lebanon, which rates at a 10. There are some bridges that have lower ratings, so I don't think people ought to be alarmed by the 38.5 rating," Johnson said.

City Public Works Director Dan Gaillet says the steel skeleton of the structure is more than capable of safely handing the vehicles that use it . Some 28,000 vehicles pass over the bridge on a daily basis, said city spokesman Chris Mims.

The problem, Johnson said, are the chunks of concrete vibrating loose from the bridge's underbelly and plummeting to Mill Street and the railroad tracks beneath.

Gaillet said the bridge, built in the 1940s, is strong, but that the concrete along the edges of the structure are decaying and losing their ability to hang on. He said the army of trains on the Canadian National railroad throbbing and drumming under the bridge also do their part to give the decaying concrete a reason to drop.

"We have to move on it. It's a sizable project," Johnson said. "We wrote MDOT and asked them if they would help us do an assessment to see what's going on. They wrote back and offered some leads and suggestions on how to get some money to help us out."

Although Johnson is thinking first of financing a cost study and repair assessment for the bridge, he said the Transportation Community and System Preservation Program grant application could potentially finance the entire project if the application gets a good response.

"Mainly we want to try to get ahead of the problem," Johnson said. He added that replacing the entire bridge, if necessary, could cost up to $15 million.

The Jackson Zoological Park, which faces re-accreditation this year, is looking to tackle its own money-issues. Zoo Director Beth Poff said the zoo will ask the city to back the facility's attempt to restructure $880,000 in debt.

"The city is essentially guaranteeing that it will be honoring its (lease) agreement with the zoo for the next eight years or so, and that the amount (the bank) gets will be continuing, so the bank will be comfortable in restructuring the debt," Poff said.

"Still, this is very preliminary right now, and we're waiting for the details," Mims said.

Poff said attendance at the zoo has fallen in the last three years during the recession and that it has had to lay-off some personnel and eliminate some unfilled positions to adjust to the revenue drop.