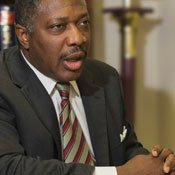 When does sunshine become an invasion of privacy? Television station WDAM, an NBC affiliate in Hattiesburg, has what it says is video evidence of abuse at the Forrest County Juvenile Detention Center--a physical altercation between staff and six youth detainees. A Youth Court judge has blocked the station from broadcasting the videotape, however, on the grounds that the footage isn't essential to the station's reporting and that airing it would endanger the juveniles' right to privacy.

Youth Court Prosecutor Pamela Castle requested an injunction from Youth Court Judge Mike McPhail after a WDAM reporter asked her to comment on the alleged abuse. With the injunction forbidding it from directly airing the video, which it received from a former employee, WDAM has relied on interviews and comments from former detainees and employees. "These kids' civil rights (are) being violated, and they're being mistreated for no reason," a former staff member with the pseudonym "Alice," told WDAM's Mike McDaniel on Jan. 5.

WDAM has appealed McPhail's injunction to the Mississippi Supreme Court. The station's case has also drawn the support of the Society of Professional Journalists and a host of news organizations.

The station preemptively offered to assuage any privacy concerns by digitally blurring the faces of any juvenile detainees in the video, its attorney Leonard Van Slyke said. He argued that McPhail's prohibition amounts to telling a media outlet that it cannot publish certain material. "That's a very rare and onerous kind of restraint," Van Slyke said.

There's hope again that the Mississippi Legislature will increase penalties for violations of the state's Open Meetings Act. On Jan. 20, the Senate passed a bill that would allow citizens to file a civil complaint in chancery court against a public body that violates open-meetings requirements.

Current state law only allows citizens to file open-meetings complaints with the state Ethics Commission. They can then appeal the Ethics Commission's findings to chancery court. State law protects individual members of a public body by only allowing complaints and fines--of up to $100--against the entire body. Public bodies can pay those fines using taxpayer money.

Sponsored by Sen. Merle Flowers, R-Southaven, Senate Bill 2289 would raise the maximum fine for a violation to $1,000, plus reasonable attorney's fees, and make officials individually liable for the payment. Only the "person found to have violated (open-meetings law)" would pay. The measure would also bar public officials from paying the fines with public funds. Chancery court rulings could nullify decisions made by public bodies during an improperly closed meeting.

The Senate passed the bill with a 31-15 vote Jan. 20. Among the bill's opponents were Jackson Sens. John Horhn and Alice Harden. Horhn told the Jackson Free Press that he considered the creation of a civil complaint "an invitation to litigation." He added: "We have a good law on the books right now. It's a matter of enforcement."

Horhn said that only nine infractions were reported to the state Ethics Commission last year. "So it doesn't seem to be a widespread problem," he said.

The small number of complaints could indicate that citizens are not filing complaints--not that public bodies are following current laws as they might if penalties were stiffer. The bill included a provision strengthening the penalty for wrongfully denying access to a public record, which Horhn said he supported. Current law puts the civil fine at $100, but the Senate bill would allow courts to fine that amount for each violation, plus attorney's fees.

The bill now goes to the House, which just passed a weaker bill that would increase Ethics Commission fines for violations, but not give chancery judges authority to nullify decisions or access fees. The House is also where open-meetings reform died last year. Immediately after the House passed Senate Bill 2373 March 4, 2010, Rep. Ed Blackmon, D-Canton, held the bill on a motion to reconsider. The measure stayed in limbo and died on the calendar a week later.