Shifting Demographics To Cause Worker Shortage 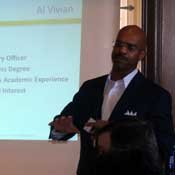 Georgia diversity trainer Al Vivian said U.S. business owners will have to come to terms with the need for an assorted work force to retain employees over the next decade.

Georgia diversity trainer Al Vivian predicts a shortage of workers within the next 10 years, if economic and demographic trends continue at their current pace.

"Do the math: Over the next 10 years, 32 million jobs in America will be vacated by retiring Baby Boomers. There'll be 20 million new jobs created. That's 52 million new jobs. However, there will only be 29 million new people entering in the U.S. work force," Vivian informed a crowd of about 50 at today's Friday Forum at Koinonia Coffee House. "That's a shortage of 23 million people. There will be a war for talent like never before."

Vivian, president of workplace training group Basic Diversity, made clear this morning that the intense competition for employees, coupled with the nation's changing demographics, would weed out businesses that were incapable of good cross-cultural relations among employees.

The need for an open mind, he said, becomes clearer every four weeks.

"In the U.S., every month, there are 1.5 million Latinos who will turn 18 years old. That's 18 million new voting Latinos every year. If they follow their normal pattern that they have been following, 92 percent of them will register and vote. That' more than 15 million new legal voters per year, and that trend is not going to stop any time soon," Vivian said.

While the changing voting numbers will determine the dominance of the first political party that can capture Latino loyalty, the registration numbers also present an apparent indication of what kind of workers businesses will be fighting for.

"Non-traditional workers are frustrated," Vivian said. "They're tired of being made to feel like they're outside. When they no longer have to, they will leave you with the swiftness of a Ferrari--they'll be out the door and going to work for somebody who will value them and treat them with respect."

A successful organization of the future, he said, must train its management to cultivate an inclusive environment "that's open to everybody," meaning that every effective leader in the business will require cultural competency.

"If they don't, they'll limit their career because they won't be able to lead that new work force coming in," Vivian said.

Demographic changes support Vivian's predictions. While Census figures estimate the nation's white majority will likely remain the largest racial group in 2050, Latinos, African Americans and Asians, as a combined group, will outnumber whites for the first time in the nation's history.

"It'll come down to connect or die," Vivian said. "Your ability to lead will fail if you cannot connect across your differences."