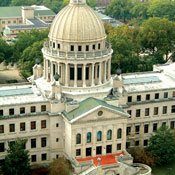 There was some good news at the state Capitol in January. The Joint Legislative Redistricting Committee met to announce their plans for passage of a redistricting plan this legislative session. It's good to see that they are listening to Mississippians and are committed to adopting a timely and fair plan.

Once every 10 years, following the release of the U.S. Census Report, every state must draw new lines for the election of local, state and federal officials. A large part of the ability or inability of those elected officials to get anything done rests with the way district lines are drawn.

Both political parties and sitting legislators want district lines drawn to make theirs a "safe seat." Too often, a "safe seat" means like-minded, more extreme voters who elect the more extreme members of their party.

In this "echo chamber" environment, there is no room for compromise or even listening to what the other side has to say. Working with constituents to solve problems becomes secondary to political grandstanding. The risk is that these elected officials become overly complacent and lose their sense of accountability to the voters. Governing then becomes the fractured, uncivil process that Americans repeatedly say they do not want. Sadly, community problems go unaddressed.

In a worst-case scenario, seen right here in Mississippi, state legislators cannot even agree on a redistricting plan. The process is thrown into court, and elections have to be "re-done," which ultimately becomes a waste of time and tax dollars.

After hearings around the state, Joint Redistricting Chairman Sen. Terry Burton, R-Newton, reported they had heard citizens' concerns about "One Man One Vote," the need for citizen input, and the importance of protecting the geographical integrity of precincts.

On a motion from House Redistricting Chair Rep. Tommy Reynolds, D-Charleston, the committee unanimously adopted the following guidelines for their process:

1. That each new voting district population number within 5 percent of the mean voting population for all state districts;

2. That each new voting district's territory be contiguous (hopefully this means compact); and:

3. That the redistricting plan follows all applicable federal and state laws (this would include the federal "One Man, One Vote" provision of the Civil Rights Act, as well as the precinct and county integrity guidelines in current state law).

Both Burton and Reynolds repeated that they plan to see each chamber's plan adopted by the other without the political posturing and obduracy promised by a few well-placed candidates for higher office.

The Joint Legislative Redistricting Committee plans to hold four public hearings throughout the state the weekend following the Census's release of the precincts' population count on February 12. Common Cause Mississippi, the League of Women Voters, the ACLU and other good government groups are urging Mississippians to participate in these forums to provide the community voice necessary to out-weigh partisan pressure to control the process.

Thirteen states around the nation have established nonpartisan or bipartisan commissions whose charge is to redraw their state's political map to reflect both our racial and ethnic diversity, and to honestly redistribute power based on shifts in in-state population from region to region, and from city to suburb.

If history is any lesson, the political party holding the governor's office or the balance of power in the legislature will attempt to draw district lines to assure their ascendance and stifle any opposition from the other party. If that happens, the result is bound to be more gridlock.

Mississippians deserve better. We deserve a system where voters choose their elected representatives--and not one where politicians choose the voters they want to elect them.

Crowell represents Common Cause Mississippi at the state Capitol.

Instead of using public input, you could just hire Derrick Johnson to do it at double the going rate, while not listing it on the public agenda, a la the Hinds County BoS. Nevermind, public input is probably a good call..

There is only one Fair way to draw district lines - Square Grids and straight lines. Everything else is pandering to a minority or majority or donor base. Maybe Three counties wide by two counties deep - or whatever would work out "even." Drawing lines to wrap up the most of XXX group or race or voting bloc is not fair to anyone - even the group that benefits most. It is permanent reminder of the artificial separateness. "Square boxes would be unfair to (insert your special interest here) voters" - yeah, and rambling squiggly lines are fair to who - politicians? What does Winston County have in common with Amite County?? They are on opposite ends of the state!! But they are both District 3. Take a look at the picture on http://www.sourcewatch.org/index.php?title=Portal:Mississippi_and_the_U.S._Congress Where does that make sense?? Fair would be counting three counties down on the right and drawing a line across the bottoms of the counties, counting three more down and doing the same, counting three more down and doing the same. THAT would be fair. Or Divide the miles length of the Alabama state line by four and draw a west-east line straight across every xxx miles. That would be fair (though ignoring county lines, which I think having different districts in the same county is weird)

Who would be the bet group to host information sessions designed to educate voters prior to the public hearings? I personally would like to attend a session that could review the current districts and discuss their fairness or lack of fairness to the resident populations, what effect that has on funding, etc. Would also like some directions as to how best to be involved in the process in a manner which is useful and reasonable.