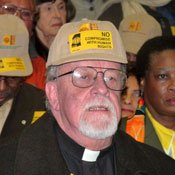 Mississippi could be headed for a courtroom showdown if the full state Legislature passes an anti-immigrant bill mirroring an Arizona law that forces law-enforcement to profile people they suspect to be undocumented residents. On Tuesday, the Senate passed a bill mimicking the controversial Arizona law, followed this week by the approval of the Senate.

"We don't represent people who are here illegally," said Sen. Joey Fillingane, R-Sumrall, minutes before voting to pass the bill, along with a majority of the committee. Fillingane is the primary author of the bill, which is almost an exact copy of a controversial Arizona law that the U.S. Department of Justice says oversteps the authority of the federal government, which retains exclusive right to enforce national immigration laws.

Ellisville Republican Sen. Chris McDaniel, who said he considered it "an honor to be part of the process" that created the bill, said the federal government was not performing its immigration enforcement duty, and so the responsibility has to fall upon the states.

Mississippi Immigrants Rights Alliance Executive Director Bill Chandler said the bill will "put a target" on the backs of all Latino Mississippians, regardless of resident status.

Fillingane said the bill restricts police from pulling suspects over for potentially being an undocumented immigrant as a first offense. He said police could only inquire as to an individual's status after pulling a driver over for a different offense, such as a seat-belt violation or speeding.

Sen. Kelvin Butler, D-McComb, said the bill would encourage racial profiling, since police officers would likely base their inquiries upon a person's appearance.

Sen. T.O. Moffatt, R-Gautier, asked if Fillingane had available the potential costs to local law enforcement to enforce the bill. Police would have to dedicate manpower, training and jail space for new offenders. Hinds County Sheriff Malcolm McMillin said last year that he did not have the resources to adopt a role of the federal government.

Fillingane said the figures were not available at the time of the committee vote, and said he would have produced them for committee members if was available.

"We would have to ask (for the costs of) every municipality in the state, and we haven't done that," Fillingane said..

Senate Bill 2179 will go to a House committee for approval, and—surviving that—require a full vote of the House before going to Gov. Barbour for a signature.

Fillingane did not speak with confidence upon the bill's survival in the House, and said he expected the bill to be disputed in the 5th U.S. Circuit Court of Appeals. However, he considered the bill's fight in the conservative 5th Circuit much easier than the Arizona bill's battle in the more liberal 9th Circuit.

House Bill 455, passed by the committee last Tuesday, extends an exemption allowing payday lenders to charge what can amount to a 572 percent annual-percentage rate on short-term loans of $400 or less. Currently, such short-term loans are exempt from a statewide 36 percent APR cap, but that exemption expires in July 2012.

Opponents of short-term lending argue that borrowers taking out $100 loans regularly take out a string of similar loans throughout the course of the year—many times to repay some portion of their first loan.

Ed Sivak, director of the Mississippi Economic Policy Center, said payday-lending customers take out seven to nine loans over the course of a year, potentially racking up about $66 for every $300 loan. The law allows lenders to charge 18 percent interest, or up to $21.95, for every $100 borrowers receive in cash.

The state does not allow a lender to lend additional money to customers with outstanding balances, but lenders can take out multiple loans from different short-term lenders. On Tuesday afternoon, the House passed the bill in a 78 to 38 vote.

"In Mississippi, there's no way to track this from happening in real time," Sivak said.

House Bill 455, as passed by the committee, extends the APR exemption but also lengthens the current two-week life of the loan to 28 days. Financial Services Center Mississippi President Dan Robinson said the change halves the amount lenders can charge.

Robinson said lenders needed the $21.95 fee to apply to two-week loans to stay in business. "If it goes to 28 days, we'll have to reduce our rates. If we reduce our rate, we're going to put small, rural operations out of business. There's simply not enough volume in these small towns," Robinson said last week.

Sivak said many short-term lenders managed to survive in Arizona after that state let its short-term exemption law expire completely, although Advance America Cash Advance Centers Inc announced in July that it was closing all 47 of its Arizona stores.

Updated Feb. 1 to reflect correct APR of 572 percent, per the Mississippi Department of Banking and Consumer Finance.