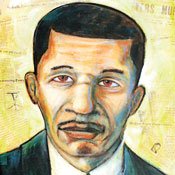 "I urge you to move this museum forward as an appropriate way to do justice to the Civil Rights Movement and to stand as a monument of remembrance and reconciliation," Barbour told legislators in his Jan. 11 speech.

Barbour could be responding to forces beyond historical commemoration, such as the furor over comments he made praising the white Citizens Council's work in his hometown of Yazoo City. As a potential 2012 Republican presidential candidate, Barbour could easily benefit from a legacy that includes a civil-rights museum.

The governor also approved the original plan for a civil-rights museum, appointing a state commission to oversee the planning process and signing a 2006 bill to provide $500,000 in bond funds for design work.

That early momentum dissipated, however, in disputes over selecting a site for the museum. A Tennessee-based consulting firm recommended Tougaloo College for its suburban setting, reminiscent of some other popular Jackson area museums, such as the Mississippi Museum of Natural Science. Downtown Jackson Partners President Ben Allen and other proponents of a Farish Street location pointed out that the Jackson Zoo, which has areas of urban blight around it, draws more visitors than any museum in the area.

Other supporters of a downtown site suggested that the selection process was unfairly weighted toward Tougaloo, with three well-connected Tougaloo alums serving on the commission and a preliminary design that called for a suburban landscape.

Despite their concerns, the commission awarded the site to Tougaloo in March 2008. By the summer of 2009, however, the college had made no further progress, with the economic recession putting a damper on fundraising.

In a statement released Saturday, Tougaloo President Beverly Wade Hogan placed blame for the lack of progress on Barbour.

"Following the action by the Commission and acceptance by the Governor, the Governor was to appoint a board of directors that would form a non-profit organization to organize the construction, funding and operation of the Museum," Hogan wrote. "To my knowledge, this part of the process has not been fulfilled."

Hogan did not respond to a request for further comment. Barbour spokesman Dan Turner also did not return calls for comment.

"Tougaloo College feels like the one invited to the long anticipated ball that was said to be given in her honor, only to discover there is no ball and she is without honor in a place to which she has given so much," the Tougaloo president concluded, in her statement.

The new proposed site is next to the proposed Mississippi History Museum, at the corner of North and Mississippi streets near the Eudora Welty Library.

On Monday, Sen. John Horhn, D-Jackson, introduced two bills to restart the museum-planning process. The first, Senate Bill 2633, establishes a new commission to oversee the project, replacing Barbour's original panel, which Horhn described as "pretty much dissolved right now." The new commission, under Horhn's proposal, would include representatives from the state's historically black colleges and universities, state tourism and history officials, representatives from civil-rights-related organizations in the state, and appointees of the governor and lieutenant governor.

Horhn's second measure, Senate Bill 2634, would provide up to $25 million in state bonds to finance the museum's planning and construction.

Barbour's commission estimated the total cost of a civil-rights museum at $50 million, including an endowment. Bonds for the $500,000 have already been issued, and the funds remain in an account managed by the state Treasurer's office. Horhn said that planning and design work would account for roughly 10 percent of the project's total cost, and put the price tag for planning and design at $5 million.

"The question is, do you just go for that, or do you go for the whole enchilada, the whole $50 million at one time?" Horhn said. "Or do you do half or some percentage of it? That's what we've got to get worked out."

Horhn said while Barbour supports his proposal for a new museum commission, he has not had a "substantive discussion" with the governor on funding or the museum's location.

"I'm not sure that the Legislature is going to be in agreement with that (site) suggestion of his," Horhn said. "We'll see."