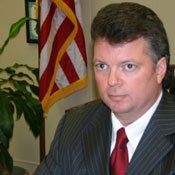 It began with one patient exhibiting unusual symptoms in 2006. Doctors were puzzled. When dozens of similar cases began to appear, they got worried. But it wasn't until they found the common factor that the mystery was resolved: counterfeit cough syrup containing diethylene glycol, a poisonous chemical used in antifreeze. This fake cough syrup was manufactured in China and sold, through international brokers, to the Government of Panama to be distributed to the poor. By the time it was discovered, more than 100 people had died.

What stands between that public health horror in Panama and the safety of Americans? We do, along with thousands of other law enforcement officials across the country.

As co-chairs of the National Association of Attorneys General's Intellectual Property Committee, we have made it a priority to combat the sale of counterfeit and pirated products. Counterfeiters pose a grave risk to our citizens' health and safety by trafficking in dangerous products, such as defective electrical products, counterfeit brake pads made of sawdust, and fake toothpaste laced with the same chemical (diethylene glycol) as the cough syrup in Panama. Further, intellectual-property theft is estimated to cost the global economy $250 billion each year, a disproportionate amount of it coming at the expense of the American economy. Counterfeiting and piracy also cause substantial loss of jobs, which we cannot afford during these difficult economic times.

Investigating and prosecuting criminal activity that spans across state lines has historically presented a unique set of challenges. Today, the global-reach and anonymity of the Internet provides an attractive platform for criminal operations--from child pornography peddlers to credit card fraudsters to those fencing stolen property. It is not surprising that criminals who capitalize on the theft of IP have also migrated to the Internet in search of easy money with little risk of getting caught.

Internet criminals traffic in counterfeit products ranging from pharmaceuticals to luxury goods. They also offer unauthorized downloads or streaming of copyrighted materials, such as the latest hit movie or song.

Sophisticated and well designed to lure consumers, these rogue websites attract millions of visitors annually and have accumulated billions of dollars in revenue.

Addressing the scourge of IP theft online will require increased cooperation between federal, state and local law enforcement, as well as a sustained effort to better educate consumers and merchants.

That is why it is encouraging that Sen. Patrick Leahy, D-Vt., introduced the Combating Online Infringement and Counterfeits Act (S.3804). This federal bill creates an expedited process for the U.S. Department of Justice to use in cracking down on websites that are trafficking in counterfeit or pirated goods, regardless of whether the website's owner is located inside or outside of the United States.

The growth of the Internet marketplace provides important new opportunities to reach consumers. But it also brings with it the perils of counterfeiting and piracy. In our increasingly competitive global economy, intellectual property is one of our last substantial competitive advantages. With this in mind, we must do more to protect the investment which American companies make in developing brands and creating content.