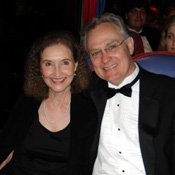 Here, Cheryl and Timothy Coker are in Greece on their way to a concert with their students—where you'll usually find them.

Music is a powerful thing. It allows people to express their creativity, convey emotions, and it can foster community between like-minded fans. Music can also cause people to fall in love. Just ask Timothy and Cheryl Coker, who have shared a life working with music.

"We've enjoyed doing a lot of things together with music through the years, and that's very special," Cheryl says.

The Cokers met after Timothy transferred to the University of Southern Mississippi in Hattiesburg in 1967. It was their junior year of undergraduate school, and they were both studying music. Cheryl was a piano accompanist for the choir when Timothy began playing for the choir as well.

"We worked together a lot," Cheryl recalls. "That's how it began. We were friends and coworkers. ... We learned about each other that way and we have continued to work together."

Aside from working together on campus at Southern Miss, the Cokers also worked together at a local church. Timothy was the youth director and youth choir director, and Cheryl helped him with his duties.

Although they spent a lot of time together, the Cokers only went on one "official" date before they were engaged.

"I didn't have a car on campus, and she didn't, either. (My) job took up my whole weekend," Tim says. "We only had one date where we went off by ourselves and went to see a movie. We saw ‘Gone With the Wind.' We had just done a lot of things together so we knew each other very well."

Just before Christmas 1968 their senior year, Timothy asked Cheryl to marry him. Earlier in the evening they ran a program with the youth group. It was around 10 p.m., and they were sitting in Timothy's office talking about what they wanted to do with their futures. Timothy did not have a ring nor did he have any plans to propose that night.

After he proposed, they went to Petal to wake up Cheryl's parents and tell them. The next day they drove to Tupelo, to share the news with Timothy's family. On the way to Tupelo they stopped at a jeweler in Jackson, where Timothy had once worked, to pick out a stone for the engagement ring. By the time they drove back to Hattiesburg, the ring was ready.

Cheryl spent the next semester student teaching in Florida, a commitment she made before she knew she would be engaged. She traveled back to Mississippi a couple times to help plan the wedding, but she planned most of it by staying in touch with her mom. "Weddings are for mothers, anyway," Timothy says, laughing.

The Cokers married right after Cheryl graduated in the summer of 1969. They had a traditional wedding at a small church in Petal, Cheryl's hometown. Her father was the choir director there, and before he walked Cheryl down the aisle, he sang a solo.

After the wedding, instead of being traditionally pelted by rice, the Cokers found their car full of balloons, thanks to Timothy's two brothers. The Cokers have kept this youthful spirit with them throughout their 41 years of marriage.

They spent their first summer together living in Hattiesburg so Timothy could finish his courses at Southern Miss. They moved to Georgia in the fall and Timothy attended the Candler School of Theology at Emory University for a year, returning to Southern Miss for his master's degree in choral conducting.

After Timothy received his master's degree, they moved back to Mississippi and began their family, "continuing to work together," Cheryl says, with a laugh. The Cokers have three children, Chrissy, JJ and Carrie, and four grandchildren.

In 1984, the couple moved to Jackson to join the Millsaps College music faculty, working together yet again. When they first came to Millsaps, Cheryl was only offered a part-time position teaching voice. She fondly recalls Timothy's support and understanding during this time when she grew her studio and waited for her full-time position.

The Cokers still teach at Millsaps and have a legendary presence on campus, especially in the music department. Timothy directs the Millsaps Singers and Millsaps Chamber Singers and also teaches choral music, theory and conducting. Cheryl is a professor of voice, vocal literature and pedagogy, opera history and women in music.

"I really appreciate their enthusiasm for music and how they try to make it relevant to us as college students," says Katie Sorey, a Millsaps senior and member of the Millsaps Singers. "They're not teaching us what we need for college—to pass the next class or make it through the next concert—but how to carry this into our professional lives. We have a really strong appreciation for music so we can be advocates for it like the Cokers are."

The success of the Cokers' marriage can be attributed to a number of things, they say: their great friendship; their ability to successfully work together; and their common and contagious passion for music. Their ability to compromise and to be supportive and understanding are also elements of their successful marriage.

"I wasn't able to begin my doctoral work until our youngest graduated from Millsaps, so I went away to (the University of) Minnesota for a year. ... It took a number of years going back and forth to finish. He was very supportive of that, and it was needed."

Respect and compassion for one another, which stems from their close friendship, has also kept their marriage going.

"She has a pillow over here about us being best friends. You don't get along all the time, but you respect each other, and you don't stay mad for a long time," Timothy says. "You have your ups and downs and things like that, but you always remain thankful for each other."

"We don't always agree, and that's OK," Cheryl adds. "We can agree to disagree."

The Cokers do not have any universal advice for having and keeping a thriving marriage. However, their marriage serves as an example of what to do to make a marriage work: be supportive and close friends, work together, enjoy spending time together, share interests and most of all, share love.

"There's no silver bullet about what makes something successful or not," Timothy says. "We feel very fortunate that things have worked this well."