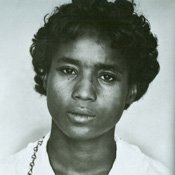 The role of young people like Freedom Rider Jean Thompson is a part of U.S. history curriculum in about 25 Mississippi school districts. Thompson was featured in the freedom-rider compilation "Breach of Peace" by Eric Etheridge.

Next year, for the first time, Mississippi will require all social-studies teachers to teach the history of civil rights in the state. The requirement will come more than five years after state lawmakers initially approved the curriculum change. Passed in a fit of enthusiasm following the prosecution of Edgar Ray Killen for the 1964 killings of three civil-rights workers, Senate Bill 2718 provided for the Mississippi Department of Education to add a civil-rights and human-rights component to its social-studies curriculum.

The clamoring for a fuller and truer account of history ran into obstacles almost immediately, though, says Susan Glisson, director of the William Winter Institute for Racial Reconciliation. Glisson, who chaired the Civil Rights Education Commission that advised MDE on the new curriculum, notes that legislators in committee stripped stronger language from the original bill. Where the measure, as introduced, stated that MDE "shall" establish a new civil-rights component, the Senate Education Committee changed the bill's wording to the more ambivalent "may."

Still, MDE enlisted the new commission's help in drafting language for the new curriculum. The reform ran into further difficulty, however, in the structure of Mississippi's school system. MDE exerts relatively little control over the actual curricula that teachers use in their classrooms. Local school boards set specific curricula, and teachers write their lesson plans based on the curriculum and a set of state-ordained objectives, which MDE details in a "framework" for each of the subject areas.

"It's very much a local control, but that means it's difficult to ensure learning," Glisson said.

MDE fast-tracked changes to the state social-studies framework for U.S. History, which most students take in 11th grade, and the state Board of Education approved the new curriculum in 2008. Changes to the framework for the other 12 grades only became final at the board's November 2010 meeting, however.

For the past two years, roughly 25 school districts have voluntarily employed the civil-rights-boosted framework in their U.S. History classes. Glisson says that the new standards are aimed at giving students a richer, more nuanced and more historically accurate understanding of the Civil Rights Movement.

The new standards are "not about ‘Dr. King stood up, Rosa Parks sat down, and now everybody's free,'" she said. "That whole simplified, inaccurate narrative—that's not the way this is getting taught. It's getting taught to understand the institutional, structural nature of racism, the role of women and young people in the movement, the role of religion (and) the effects of the Civil Rights Movement (on) other kinds of movements for human rights."

Indeed, the framework demands that students "analyze the response of federal and state governments to the goals (including but not limited to ending de jure and de facto segregation and economic inequality) of the Civil Rights Movement," a process that would ideally touch on state institutions, like the State Sovereignty Commission, that worked to resist integration. For Mississippi Studies, a one-semester history course most students take in their freshman year, the state framework specifically mentions institutions like the Sovereignty Commission and groups like the Mississippi Freedom Democratic Party. It also asks students to assess the impact of specific figures like Gov. Ross Barnett, Sen. James Eastland, Fannie Lou Hamer and James Meredith.

The additions to state social-studies standards extend all the way to kindergarten, where the new framework asks students to distinguish "rights" and "responsibility" and to "name figures of authority and their position in upholding human and civil rights."

This year, as he has every year since the bill's passage, Republican Rep. John Moore of Brandon has introduced a bill to repeal the civil-rights history provision. Moore told the Jackson Free Press that he opposes the curriculum for two reasons. Teachers in the state are already overwhelmed with curriculum requirements and should focus on core content areas like reading and math, he argued. Moore said that he was also wary of "the radical positions" of Teaching for Change, an organization that the Winter Institute enlisted to provide optional training for history teachers in the new curriculum, which aims to bring social-justice principles into education.