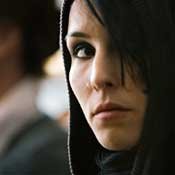 "Girl with the Dragon Tattoo" stars Michael Nyqvist and Noomi Rapace (pictured) as private investigators who discover plenty about the Vanger family and a 40-year-old murder.

Every now and then, you'll still hear some misguided soul complain, "There's nothing to do in Jackson." While it's unclear what Jackson these people are talking about (Jackson, Tenn., perhaps), there's yet another thing to add to your to-do list of weekend events: Watch independent films on the big screen--a really big screen.

This month, thanks in part to the Mississippi Film Institute and the Davis Planetarium, you can see a plethora of films downtown. "Inside Job," a documentary narrated by Hollywood golden boy Matt Damon, takes an in-depth look at the global financial calamity of 2008 that could have caused even more devastation that it did. Everyone from politicians to journalists to economists give their informed two cents about what happened and what it all means. ("Inside Job" shows Jan. 14 at 7 p.m.)

Remember when Eliot Spitzer wasn't a CNN commentator with his own show? Remember when he was the governor of New York state who, The New York Times revealed, had a penchant for prostitutes ... errr, call girls? The tagline of "Client 9: The Rise and Fall of Eliot Spitzer" is "You don't know the real story." Since they think you don't, go find out. ("Client 9" shows Jan. 14 at 9:10 p.m. and Jan. 15 and 21 at 7 p.m.)

"Mesrine: Killer Instinct" and "Mesrine: Public Enemy #1" are Jean-Francois Richet's venture into the life of French gangster Jacques Mesrine. Parisian thugs. Who knew? Mesrine kills, robs and kidnaps. He carries out his menace-to-society ways with rugged looks masked by his sleek aviator shades. By the way, it's not Mesrine who wreaks all the havoc. His sexy side chick, Jeanne Schneider, isn't too bad at stirring up a little drama herself. ("Mesrine: Public Enemy #1" shows  Jan. 15, 9:10 p.m.)

"White Material" is a story about race relations you don't often see on the big screen. Instead of a white hero rescuing a lost black soul, director and screenwriter Claire Denis introduces us to a black savior for a white African family who's struggling to save their coffee plantation. Find out what happens when the two meet, and their worlds start to spin out of control. ("White Material" shows Jan. 21 at 9:10 p.m. and Jan. 22 at 8:40 p.m.)

A documentary about wastelands beyond the city limits of Rio De Janeiro doesn't sound like it would be on the list of feel-good movies, but with its focus on the empowering and revolutionizing power of art, "Waste Land" isn't your ordinary the-earth-is-dying kind of film. Follow Vik Muniz on the emotional and inspiring journey to meet the catadores who live and work with garbage. ("Waste Land" shows Jan. 22 and 28 at 7 p.m.)

If crime, drama and mystery are more your speed (the fictional kind, that is), don't miss "Girl with the Dragon Tattoo," starring Michael Nyqvist as Michael Blomkvist. The story is about murder, dysfunctional families, Blomkvist, his tatted-up sidekick and the things they unearth about the secretive Vanger clan during their investigation. But that's not the only Swedish "girl who" film Daniel Alfredson directed that you can catch this month. "The Girl Who Played with Fire" has the same leading lady and gent as "Dragon Tattoo," but this time, the duo does a different kind of investigating: an expose about sex trafficking in Sweden, to be exact. ("Girl with the Dragon Tattoo" shows Jan. 28 at 8:45 p.m., and "The Girl Who Played with Fire" shows Jan. 29 at 8:50 p.m.)

The French "35 Shots of Rum" is about a father, his daughter and a man who wants to date her. "The elements of every 'losing your daughter' comedy are there--and ripe," movie reviewer Chris Cabin said about the film. "But all these elements remain familiar without becoming predictable, flowing into emotional states both subtle and sublime where many other films would depend on exposition." Sold? ("35 Shots of Rum" shows Jan. 29 at 7 p.m.)

To see the complete film schedule, visit http://www.msfilm.org and click "Cinema Schedule" from the website's homepage. Tickets are $9.

I agree, Darren. I saw "Inside Job" there with a friend Saturday night. It's a great venue. BTW: If you haven't seen "Inside Job" go see it!