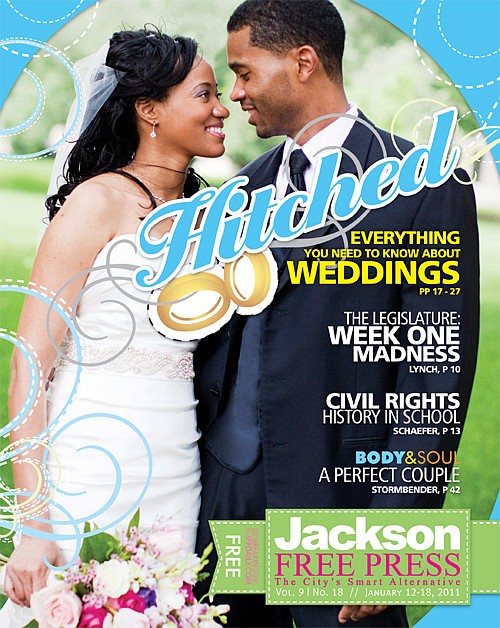 Chris and Shalon Wansley love exchanging gifts. "We pride ourselves on being gift givers," Chris says. On the anniversary of their first date, Chris, 32, took Shalon, 28, to dinner and gifted her with an iPod. Later on that evening, he took the gift giving to another level.

"She has always said she wanted a Build-a-Bear that looks like me," Chris explains. So he gave her a teddy-bear version of himself, dressed in a gray pinstripe suit with glasses. Shalon burst into laughter, the couple says. When she stopped laughing, she opened her eyes and saw Chris holding an engagement ring.

By the time the wedding rolled around, the couple opted to exchange gifts and personal letters rather than vows at their April 24, 2010, ceremony. Chris gave Shalon her "something blue" (blue topaz earrings), and Shalon gave Chris a pair of Tiffany's cufflinks he'd been eyeing. They agree, though, that the greatest gift they received was each other.

"It's comforting. You have somebody that has your best interest in mind that you can depend on. We'd do anything for each other," Shalon says of their relationship.

Chris adds: "She's the greatest thing that ever happened to me. She truly has been—as a girlfriend, as a fiancée, as a wife, at every stage. I'm lucky to have her in my life."

They each speak of the other in a complimentary, but not nearly contrived, way. From the looks they exchange and the laughter they share reminiscing about their story, their love is obvious. (Chris and Shalon debate about when they first met: Chris claims they met at a banquet in 2005; Shalon claims it was another banquet the following year.)

The native Mississippians—Chris is from Jackson, and Shalon is from Madison—graduated from the University of Mississippi Law School. Chris earned a bachelor's in math from Jackson State University in 2000 and his law degree in 2003. Shalon graduated from Spelman College in Atlanta in 2004 with a bachelor's degree in psychology before going on to law school. While Shalon attended law school with Chris' brother, Chris had begun working and he became her mentor.

"I was a horrible mentor," Chris remembers.

Shalon confirms it: "He sucked."

Terrible mentor or not, attraction blossomed, and the duo began dating April 17, 2008, and quickly fell in love.

Despite their love, Chris and Shalon's trip to the altar was not obstacle-free. They'd hoped to get married April 17, 2010, with a reception following at the Mississippi Craft Center, but that proved to be an issue. The Craft Center was holding their "Sheep to Shawl Day" event April 17. They could have opted for an evening wedding, but the sheep scent would have lingered well until nuptial time and beyond.

They changed their wedding date, but their troubles weren't over. The couple wanted to have the wedding at their church, New Hope Baptist Church, but weren't able to because another engagement was scheduled there for that day. They chose First Baptist Church Jackson's chapel instead. The church required them to attend pre-marital counseling, which the pair now suggests to anyone contemplating marriage.

After completing counseling, Shalon's longtime neighbor and former church pastor, Rev. Keith Rouser, officiated their April 24 wedding. Trouble persisted. The day of their ceremony, a tornado ripped through Yazoo City and stormy weather caused power outages across Jackson, including at their wedding and reception venues.

Hours before the ceremony, the power outage at the chapel was fixed, and the sky turned sunny. The wedding commenced without any further problems. Photographer Erin Fults took shots outside before and during the wedding, and the couple made their grand entrance at the reception minutes after power returned to the Mississippi Craft Center.

Throughout the ordeal, Shalon remained calm, while the mishaps had Chris worried. The couple has balance—Chris is talkative, and Shalon is organized—and they tend to complement each other. Chris helped Shalon overcome her fear of heights on their Mexican honeymoon, where he convinced her to go on the zip line. Where one stops, the other one starts.

Their love of food, though, seems to be equal. Chris jokes that it drives their relationship. "We love to eat," he says. Shalon agrees, advising newlywed couples, "Take a break to enjoy the food you paid for."

The Wansleys' reception spread, provided by Fresh Cut Floral & Catering, featured more than 20 items, including a martini bar and a seafood bar with a southern twist: fried catfish. They gave bourbon pecans as favors.

Sandra Groover of The Cake Shoppe made their wedding cake, with strawberry and lemon layers (and one other layer neither can remember but Chris says was "really good"). Grouper also made the chocolate groom's cake with butter-cream icing, chocolate ganache and chocolate-covered strawberries.

The guests danced to '70s and '80s funk provided by Tyrus Cox, Chris' friend, and the couple's first dance was to Michael Jackson's "Lady In My Life."

Chris and Shalon shopped local, when possible, and bought many wedding items on etsy.com, where artisans sell their handmade creations online. One special item was a locket with a picture of the bride's grandmother, who had died years earlier, placed in the bouquet. "She always told me a lot about her grandmother, even back when we were just friends. And from her stories, I see a lot the qualities she says her grandmother had in her," Chris says.

The couple now lives in Jackson, and both practice law. Shalon works at the Mississippi Court of Appeals, and Chris is an attorney at Balch & Bingham law firm. While Chris says they rarely fight, when the duo does, they leave their esquire skills at work.

"We fight fairly; we try not to lawyer each other," he says.

Shalon adds: "We want to see each other happy and to prosper. We just really love each other."

For more romance-filled stories and fashonista designs, head over to the Fly blog, and be sure to follow us at @FlyJFP for fashion tips and tricks, or to send your own ideas.