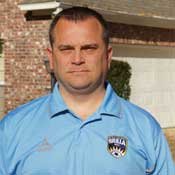 For Thomas Bobo, coaching soccer is more than just a hobby; it is an opportunity to be a community leader. Bobo believes that coaching allows him to stay connected with youth and teach life lessons on and off the field.

Last month, the U.S. Youth Soccer Association named Bobo the 2010 U.S. Youth Soccer Coach of the Year for Region 3, which includes most southeastern states. Brilla Soccer Ministries, the program Bobo coaches for in the Jackson area, promotes the sport in Mississippi while also offering a faith-based environment for players.

The humble coach credits his team for his success. "I helped get the girls ready, but at the end of the day, I didn't play a single minute in any of those games. They did," he says. "The coach gets a plaque, but the honor and tribute goes to the girls."

Bobo describes the female team's four-game win in the 2010 Mississippi State Championship as a "Cinderella story." Most of the girls experienced rejection from other high-profile soccer leagues before coming together from seven area high schools to form the Mississippi Brilla Juniors '95 Girls team. The "'95" in the team name signifies that players were born in 1995. Bobo says it is gratifying to coach a team he has watched overcome obstacles.

"I enjoy teaching kids how to handle adversity, reach for and accomplish their goals," Bobo says. "The little guy won this time. Don't ever let people tell you that you can't do something,"

Soccer has been a tradition in Bobo's family since he can remember. His passion started in the early 1970s when his father, the late Tommy Bobo Sr., began coaching soccer. Bobo's father disciplined his son in the home and on the soccer field, and the sport offered a chance for them to spend time together.

"I attempt to replicate what he did," Bobo says.

The Clinton native also attributes his accomplishments to his tight-knit family. His wife, Lori, their two sons, Tommy and Graham, and daughter, Shelbi, all share a passion for soccer. Like his father, Bobo had the privilege of coaching all of his children.