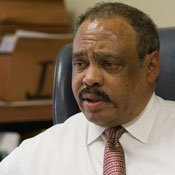 Former Jackson Police Chief Robert Johnson says two Jackson police officers should not have been in a position to shoot a Jackson resident on New Year's morning.

Police shot Jackson resident Sherman Jackson, 27, in the arm about 1 a.m. on Jan. 1, after Jackson refused to remove his hands from his pockets at police requests. The Jackson Police Department would not name the two officers involved in the non-lethal shooting.

The officers arrived on Santa Rosa Street, behind Hughes Field and Hardy Middle School, after receiving reports of gunfire in the area, according to a Jan. 1 JPD press statement.

Police approached Jackson and an unnamed companion, and demanded that Jackson remove his hands from his pockets and put them in view. JPD claims Jackson fled the scene with his hands still in his pockets, and an officer pursued him on foot. When the police officer caught up with Jackson, JPD says the officer removed his gun from his holster and accidentally fired the weapon into the ground.

Hearing the gunshot, the policeman's unnamed partner believed Jackson had fired on his partner, and responded by shooting Jackson in the arm. JPD reports that Jackson had been attempting to conceal marijuana. Police charged him with possession, a misdemeanor and with disobeying a police officer.

Johnson, who served as Jackson's chief of police in 1994 under then-Mayor Kane Ditto until 1997 during Mayor Harvey Johnson Jr.'s first term, said the event--as described by JPD--does not make clear why the officer dealing directly with Jackson drew his weapon.

"I think with the proper training and proper precautions, it could have been prevented, if indeed it was an accident," Johnson said. He explained that the situation appeared to call for one officer to stand apart from the interaction--to be at the ready and in a position to draw a weapon if needed--and another officer to physically grapple with the suspect.

The officer interacting with the suspect, however, would not normally draw his weapon for a number of reasons. Drawing a weapon while close to the suspect, for example, puts the weapon within the suspect's reach. Also, holding a weapon in the middle of the scuffle means having only one hand to deal with the suspect when both hands should be available.

"Two officers drawing their weapons for a guy not removing his hand from his pocket is a little outside normal procedure," Johnson said. "There should be one cover officer--if you have reason to suspect the suspect is armed--but you have to look at the totality of the circumstances. What were they being stopped and questioned for? I don't think there had been any reports of a felony being committed, or at least no felony that would cause the use of deadly force, but caution should certainly be used."

Sen. David Blount said the state Legislature had recently passed laws making available to the public police "incident reports," but Mississippi Center for Freedom of Information attorney Leonard Van Slyke said incident reports do not contain the same details as the reports written by police involved in the confrontation.

"They are required to give you an incident report, but it only says what, when and where," Van Slyke said. "It's a limited information kind of deal."

The police department claims the officer "believed that the suspect had a weapon on his person," due to the nature of the call, which involved gunfire.

Johnson said he does not see the logic of the incident: "If you get a call about a guy who had shot anybody, then you can expect that kind of reaction, but that wasn't the case there, so there wasn't any need for the threat and use of deadly force in that situation. When an officer pulls his gun and orders someone to do something, that's the threatened use of deadly force. It's the same thing as pulling your gun on a guy who refuses to put his hands on the wheel," Johnson said.

Jackson received treatment at the University of Mississippi Medical Center. Doctors immediately released him after treatment. He could not be reached for comment.

Nothing really new here. JPD has been doing this kind of stuff for years. They lie. They lie in reports. They lie in court. They lied when Robert Johnson was chief. They still lie. Not all for sure but many do. How can you even start trying to turn the community around when the people who are supposed to be enforcing the law are, in many cases, operating under the same "code" as the criminals? It will not change as long as Internal Affairs remains a joke. Jackson's crime problem and Jackson's police problem are two sides of the same old rusty coin. The story JPD tells about this shooting sounds like a kid explaining to his mother how he had to eat the cookies in the cookie jar because they were attacking him.

I'm not sure the former Chief is the best person to be the focal point of a story. He could easily have an agenda against the current administration/force.

I'm not sure the former Chief is the best person to be the focal point of a story. He could easily have an agenda against the current administration/force. He's a former police chief of this town, having served under two administrations. He's commenting on police procedure. You might disagree with him, but accusing him of having an agenda because he allowed himself to be interviewed seems like a stretch.

I would not want to walk a mile in the shoes of these officers, who do face gun violence. But the officer could only accidentally fire his weapon if he had his finger inside the trigger guard. Why did he have his finger on the trigger as he drew his weapon? And why did the other officer fire when he had the suspect at gunpoint and could not see a weapon, if that is what happened? At least no one died. I am sure it was a nightmare for everyone involved. The officers should be held responsible for their mistakes, but I don't think they should be treated harshly if the mistakes were honest. The city should pay Mr. Sherman's medical expenses, at the very least. A young man hiding a small amount of marijuana in his pocket does not deserve to be shot. I certainly agree with blkjazz that JPD internal affairs remains a joke. There needs to be much greater transparency in the police department. I wonder whether we will ever even know how the case is resolved for these officers.