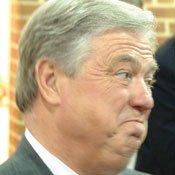 I was so busy Friday and through the weekend, tweeting about the storm and drinking champagne (not at the same time), that I didn't notice until today that New York Times columnist Bob Herbert had had written another column about the Scott Sisters and Haley Barbour. Herbert starts out by saying that he had gotten a call on New Year's Eve from one of the sisters, Gladys, "which was a terrific way for 2010 to end."

We know what he means: When I saw the (rather bizarre) statement come through from Barbour's office on Wednesday announcing that he was suspending the women's sentences (because they were no longer a danger, and one condition of one giving the other her kidney), I yelled it out in to the newsroom. Like the great reporter he has become in the last couple years, Ward instinctively picked up his phone and called their mother Evelyn Rasco on her cell phone. As a result, he got to tell their mother the great news first. Her response: "Oh my God. You're kidding me. Oh, please--oh my God." (Read that story and Barbour's statement here.

Times like those make the low-pay-long-hours nature of being a journalist worth it. Then, on Friday morning, Rasco mentioned Ward and the "Jackson Press" on The Today Show.

Ms. Rasco also, admirably, made the point that a lot of innocent people are likely in prison in Mississippi (so far, DNA has helped free a string of black men in prison here for heinous crimes), and many prisoners aren't getting the medical care they need. We need to listen to this; it is very exciting that the Scott Sisters are going home, but we can't just pat Barbour on the back and leave it at that.

Besides, as the Jackson Free Press revealed back in 2008, Barbour has a heinous record of pardoning and releasing very violent (white) men from prison—who brutally killed wives or girlfriends. This is where Herbert has come in: two times now placing the plight of the Scott Sisters, in prison for life for orchestrating an armed robbery, but not for wielding the gun, in the larger context of just who goes to and stays in prison in Mississippi. And, we are happy to report, both times, Herbert has given the Jackson Free Press credit for reporting this information (along with Slate, where Reason magazine's Radley Balko wrote about our 2008 report), which national media don't always do, not to mention people who are supposedly working to further the status of women in our own state. Herbert doesn't fall down praising Barbour, however:

I am not surprised at Governor Barbour's behavior. He's not the first person who comes to mind when I think of admirable public officials. The Clarion-Ledger of Jackson, Miss., noted that the governor had been on the radio this week asserting that there was hardly anyone in prison who didn't deserve to be there. It's an interesting comment from a governor who has repeatedly demonstrated a willingness to free prisoners convicted of the most heinous crimes.

The Jackson Free Press, an alternative weekly, and Slate magazine have noted that Mr. Barbour has pardoned four killers and suspended the life sentence of a fifth. So cold-blooded murder is no reason, in Mr. Barbour's view, to keep the prison doors closed.

Herbert is right: We can praise Barbour for helping free the Scott Sisters, even if his rather backward public reasoning makes him sound like he's terrified of the right-wing tough-on-crime voters he panders to (although how pardoning all those women-killers fits that shtick is beyond me). But this move now, which was likely even before his Citizens Council praise, does not make Barbour a hero. It makes him a governor who finally did the right thing by two black women who should no longer be in prison in his state. That is something he should be doing every day as a matter of course.

I've never understood why Musgrove or Fordice didn't address the Scott sisters. It shouldn't have even been up to Barbour.

I couldn't agree more, Dave. I'm sure not a fan of either of them. I'm guessing the stink about it wasn't stinky enough.