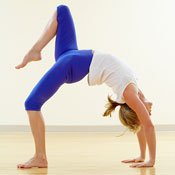 My personal yoga journey started at a studio in Clinton. I discovered feeling and looking healthy didn't have to involve pain or teeth-gritting abstinence from anything that tasted good. Yoga has added to my life in intangible ways. I lost weight, looked better and ate better almost unconsciously. I developed friendships with people I might have never otherwise met. It was a great experience for me—one that has helped me live more intentionally.

Generic definitions don't fit this ancient practice well. The classical practice may have originated in India, during the sixth, fifth and fourth centuries BCE. In the West, the physical practice of hatha yoga has become quite popular. So, what is yoga?

Tons of books have been written on the subject of yoga and the philosophy that underlies the practice. "The Shambhala Encyclopedia of Yoga" by Georg Feuerstein, Ph.D., doesn't define yoga so much as describe it. The word is derived from the Sanskrit root yuj, described as "union," as in bringing the body, mind and spirit together. Feuerstein also asserts that yoga can be applied to a "spiritual endeavor" to control the mind and senses. TKV Desikachar further describes it as attentiveness to our actions. In other words, yoga, at its root, is acting with intention.

Hatha yoga is beneficial in attaining greater strength and flexibility. Again, I refer to Feuerstein's "The Shambala Encyclopedia of Yoga" to summarize hatha yoga as a means of perfecting the body through the use of asanas, or postures, integrated with breathing. Asanas are yoga poses developed to provide a beneficial effect on the body. Different asanas provide different benefits.

If you've never been exposed to yoga, this is probably about as clear to you as the Pearl River. So I'll take you back to my experiences as a student.

There are so many styles of yoga out there that anyone can find one to suit their own individual needs. In most studios I've practiced in, the class starts with a warm-up, which may include an opening invocation, depending on the style. Invocations, or chants (usually in Sanskrit) are done to put you in the mood and help set an intention for your practice. Integrating breath with movement is emphasized in yoga, and the teacher will generally guide you verbally on when to inhale and exhale. Attention to your breath will help you get grounded.

In the body of the class, many yoga teachers will lead you through a flowing series of poses. The next phase will be a series of more static poses that you'll hold for a longer period of time. After a short cooling down, the class is capped off with shavasana, an eyes-closed reclining position to provide a state of deep relaxation. There may be a closing chant as well, again depending on the particular style.

With all this talk about chanting and opening invocations, is yoga some kind of religion? The answer is no. While yoga can be used—and has been used—as a vehicle for spiritual awakening, it is not a religion and doesn't interfere with whatever religious beliefs you might have. Swami Jnaneshvara has an excellent website (SwamiJ.com) that explores the differences between yoga and religion.

There are five niyamas, or observances. Shaucha is the maintenance of a clean body, mind and environment. Santosha is maintaining contentment at one's present state. Tapas is the enthusiastic focus of our energy. Swadhyaya is the process of self-study. Ishvarapranidhana is the practice of acknowledging the broader meaning of even our simplest actions.

Hatha yoga can be an excellent adjunct to any fitness regimen, or it can be a fitness regimen in itself. Will Western medicine embrace yoga as a therapy for treatment or prevention of illness? It's quite possible. Currently, The National Center for Complementary and Alternative Medicine of the National Institutes of Health has numerous studies on yoga as therapeutic intervention for everything from menopausal symptoms to post-traumatic stress disorder to rheumatoid arthritis. You can read up on these studies by going to nccam.nih.gov/health/yoga, or you type "nih yoga" into your search engine and you'll pull up their website.

If you're interested in finding a class, you can simply open up the Yellow Pages or get online to find studios in your area. We have lots of options in Jackson; and many gyms offer yoga classes, too.

Your health club or gym may also offer yoga classes.