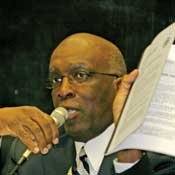 A proposed national civil-rights museum in downtown Jackson could receive $30 million in state funds, under a bill up for consideration by the state House of Representatives. The House Ways & Means Committee voted today to approve HB 1463, which allots $55 million total to the civil-rights museum and a museum of Mississippi history, both to be located near the William Winter state archives building. The bill now goes to the House floor for a vote by the full chamber.

Mississippi Department of Archives and History Director H.T. Holmes said construction on the history museum could begin within a year. Work on the civil-rights museum would take longer to start, given the additional planning necessary, Holmes said.

In 2008, a commission appointed by Gov. Haley Barbour named Tougaloo College as the location for a proposed civil-rights museum after a contentious selection process. Work and fundraising for the museum stalled, however, and Barbour called for restarting the project for a downtown Jackson location last month.

Rep. Willie Perkins, D-Greenwood, a Tougaloo graduate, offered an amendment that would direct the project back to the school. Committee members voted down Perkins amendment 16-6.

The House bill as first introduced, directed larger amounts to both projects: $42 million in state bonds to the civil-rights museum and $30 million to the history museum. Committee Chairman Percy Watson, D-Hattiesburg, asked committee members to amend the bill to lower the amounts, however. Committee members approved Watson's amendment and voted to pass the bill.

Watson said after the meeting that the $42 million figure for the civil-rights museum was a "typographical error." The reduction in funds for the history museum was at the request of the Department of Archives and History, Watson said.

Watson said he was glad to see committee members rally around the new location.

"When we had the museum issue before us (last time), we got so bogged down in where it was located, that I think it really created a delay in the funding of the museum," Watson said.

The House proposal is slightly more generous than a bill proposed by Sen. John Horhn, D-Jackson, which would give the civil-rights museum $25 million in state bonds. That bill is due for consideration by the Senate Finance and Public Property committees.