Cost of Flood Study Could Jump 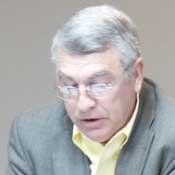 Levee Board Chairman Gary Rhoads said he was nervous about potential cost increases for a USACE/Levee Board joint study on flood control for the Pearl River.

A study examining flood control along the Pearl River could cost taxpayers twice as much, due to post- Katrina requirements, the U.S. Army Corps of Engineers told the Levee Board today.

Gary D. Walker, project manager for the U.S. Army Corps of Engineers Vicksburg District, said tighter nationwide USACE standards mean the Corps will have to more thoroughly review any flood-control plan for the Pearl River area, whether it is a proposed levee expansion or the creation of a flood-retaining lake.

"Many of the additional costs are due to post-Katrina requirements," Walker told the Jackson Free Press. "You have to have more review of your finished product, and the cost-estimate requirement has to be more rigid now."

The Rankin-Hinds Pearl River Flood and Drainage Control District Board, or Levee Board, convinced the USACE to consider a plan to dredge the Pearl River and build a lake south of the Ross Barnett Reservoir as a locally preferred flood-control plan. The lake, board members said, could conceivably hold enough flood water to stave off a flood similar to the historic damage of the 1979 Easter Flood, which inundated downtown Jackson and portions of Rankin County.

The Corps, for years, refused to consider a lake as an alternative to expanding the incomplete levee system protecting Jackson and Rankin County from the Pearl River, due to the potential environmental impact the new lake could have upon the wetland area between Hinds and Rankin counties. The Corps agreed to consider a lake as a possibility last year, under pressure from all of Mississippi's congressmen.

The next step, however, involves the Corps and the Levee Board reaching an agreement on the cost to study the flood-control plan and its lake component. Levee Board Chairman Gary Rhoads said the Levee Board originally expected the study to cost about $2 million, with the cost to be divided evenly between the local board and the Corps.

Today, however, Walker informed the board that costs could be anywhere between $3 million and $4 million--and would not commit to a $4 million cap.

"Don't put a lot of faith in that (estimate)," Walker said. "It's still under review. Could be a lot less; could be more than that. We need to get it down to where we're satisfied enough to give (the Levee Board) something to look at. We need a good estimate."

Walker said the Corps now demands more detailed cost estimates. "They authorized some projects in the past that, when you got ready to build it, the price got a lot higher. They don't want that now," Walker said. He added that the Corps also requires more data for projects that affect "public risk," like levees, and that the 1996 levee plan originally touted by the Corps now needed to be updated.

"The levee project will be dead on arrival if the only data we've got is information based on a 1993 time frame," Walker said, while explaining that some areas originally slated for levees now contain development, such as housing or new roads. He added that the lake plan needed more thorough review of its own, for issues such as dredging depth.

Rhoads said he was nervous about the cost increase.

"We're going to buy this, but we don't know for sure what it's going to cost," Rhoads said. "In the past, we've been talking about (it costing) $2 million. I don't know where we're headed with this."