The Duel in Dallas 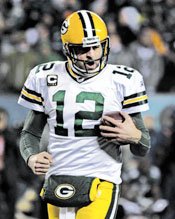 After months of hot practices, two-a-days, preseason games, 16 regular-season games and battles against injuries, only two teams are left standing on the verge of immortality. The Green Bay Packers and the Pittsburgh Steelers have earned the right to play in Super Bowl XLV Feb. 6.

Both of the franchises are NFL royalty.

Green Bay, Wis., aka "TitleTown USA," is home to the Packers, who hold the most NFL championships in the league with 12. The Vince Lombardi Trophy, which both teams aim to win this year, is named after the legendary Packers coach.

Pittsburgh has been the most dominant NFL team in the Super Bowl era. This trip will be the eighth for the Steelers, tying them with the Dallas Cowboys, and with six wins, no team has won more Super Bowls than Pittsburgh.

Fans, media and the teams will descend on Dallas (more accurately Arlington, Texas, a Dallas suburb) for the Super Bowl. The site of Super Bowl XLV is Cowboys Stadium, the $1.3 billion "Dallas Palace" (or "Jerry's World" for Cowboys owner Jerry Jones). Look for this Super Bowl to rival 1980's Super Bowl XIV in Pasadena, Calif., which still holds the attendance record of 103,985.

Memories of Games Past
Sunday's game reminds me of two previous Super Bowls.

For Green Bay, this game is reminiscent of 1995's Super Bowl XXIX between the San Francisco 49ers and the San Diego Chargers. In that game, 49ers quarterback Steve Young was looking to move out of future Hall of Famer Joe Montana's shadow after taking over four years earlier.

Aaron Rodgers has taken over for Brett Favre but still lives in the quarterback's impressive shadow. Rodgers took over for Favre three years ago, and he'll be looking to prove he is just as good as the man he backed for three years.

Can Rodgers shine on the big stage and bring a championship back to Green Bay like Favre did? No quarterback in NFL history has replaced a future Hall of Famer and taken his team to the big game quicker then Rodgers. Only Young and Rodgers have replaced a legend immediately behind center and taken their teams to the Super Bowl.

Pittsburgh has the luxury of having a Super Bowl-winning quarterback, Ben Roethlisberger. This is his third trip to the Super Bowl, and he won his previous two tries.

Of the quarterbacks who have reached at least three Super Bowls, all are in the Hall of Fame or will be inducted when their careers are over. With a victory, Roethlisberger will tie New England's Tom Brady with three wins each.

But Roethlisberger reminds me of 2001's Super Bowl XXXV storyline, when Baltimore Ravens' Ray Lewis came into the game recovering his image from a fatal stabbing incident on Super Bowl night the year before. After being charged with murder, Lewis pleaded guilty to a misdemeanor obstruction-of-justice charge and testified against two other defendents.

Roethlisberger has faced accusations of sexual assault twice within an eight-month span. The Steelers quarterback was accused in Lake Tahoe, Nev., in July 2009, and again in Milledgeville, Ga., in March 2010. No formal charges were filed in either incident, but Roethlisberger is the first NFL player suspended for violating the league's personal conduct policy not charged or convicted of a crime.

The Pittsburgh QB missed the first four games of the season because of his suspension. And while Lewis has regained his image and earned off-the-field endorsements, it's not known if Roethlisberger, aka "Big Ben," will do the same.

Sunday's Match Up
Both teams are similar, and both are top defense in the NFL regular season (Green Bay ranked fifth and Pittsburgh ranked second). Defensively, the Packers and Steelers both like to pressure the quarterback.

The Steelers' front seven is good at getting to the quarterback and shutting down an opposing team's running game; they own the first-ranked rushing defense. Pittsburgh relies on LaMarr Woodley, James Harrison, James Farrior, Ziggy Hood and Lawrence Timmons to stop the rush and pressure the quarterback.

Green Bay has a distinct advantage in the defensive back seven: They are fifth in the NFL against the pass. Covering the pass is one of the Packers' strengths. Charles Woodson (reigning NFL defensive player of the year), Nick Collins, A.J. Hawk and the emerging Tramon Williams (with three interceptions in the playoffs) have made passing against Green Bay tough in the playoffs.

The teams' defenses will only be as good as their star player. For Pittsburgh that's Troy Polamalu, who is always around the football and can cover and play run support. Green Bay will look to Clay Matthews III (whose father, Clay Matthews Jr., and uncle, Bruce Matthew, were both long-time NFL stars at their positions) to rush Roethlisberger and help in pass protection.

But Pittsburgh's secondary (ranked 12th in pass defense) and the Packers' defensive line (ranked 18th in rush defense) will have a say on the outcome of this game. It will be interesting to see which defensive coordinator, Steelers' Dick LeBeau (inducted into the Hall of Fame before the start of this season) or Packers' Dom Capers, makes the best adjustments; both teams play a 3-4 base defense.

Offensively, both teams can sling it around the field passing or run the ball effectively for a win. The receivers are good on both teams; Pittsburgh has younger wide outs, while the Packers rely on battle-tested veterans.

The Steelers will look to get the ball deep to Mike Wallace for big gains, and Heath Miller and Hines Ward are great at getting down the field or making a big catch to keep a drive alive. Green Bay can eat up yardage in big chunks with Donald Driver, Greg Jennings and Jordy Nelson in the passing game.

Rushing the ball can either be a struggle or a surprise for either team. Green Bay has found a running game lately thanks to John Kuhn and James Starks finding his way into the starting line up, but was ranked 24th in the regular season.

Pittsburgh mainly goes with Rashard Mendenhall and Mewelde Moore in the ground game. Both are capable of solid numbers but can fade into the background as evidenced by the Steelers' 11th-ranked rushing attack.

Both teams are excellent at forcing turnovers. Green Bay finished plus 10 in the turnover department, and Pittsburgh finished plus 17. The Steelers and the Packers No. 2 and No. 5 in the league, respectively, at interceptions.

If it comes down to kicking, I'll take the Packers' Mason Crosby (place kicker) and Tim Masthay (punter) over the Steelers' Shaun Suisham (place kicker) and Jeremy Kapinos (punter). Neither team has a dangerous return man so handling punts and kickoffs could make the difference in return yards.

My Pick
In their respective championship games, both teams started out on all cylinders but failed to show up in the second half. That could make for an exciting first half but a boring second.

It's fitting these teams meet in the championship game. Every playoff game has been a rematch of a game played this season or last, and a Green Bay-Pittsburgh match is no exception. When they met in 2009 in a thrilling 37-36 Steelers' win, Roethlisberger threw the game-winning touchdown as time expired.

Super Bowl XLV would become an instant classic if these two teams repeat that performance on this biggest stage. It's also what makes this game so hard to pick.

All things looking even, I believe the Packers are younger and hungrier then the Steelers. Plus, personally, I just can't root for Pittsburgh quarterback Ben Roethlisberger, who, in my mind, is a sexual predator.

I am taking the Packers to win Super Bowl XLV. Packers 35, Steelers 17

Stories to Watch
Will the comedy shows lampoon the Steelers quarterback this week like they did while he was suspended? I can just hear the allusions to Internet-sensation Antoine Dodson: "hide yo' kids, hide yo' wife, and hide yo' husband" because Roethlisberger is coming to town.

Other story lines to watch:
• Will Steelers coach Mike Tomlin become the youngest coach in NFL history to win two Super Bowls?
• Will Green Bay become the second No. 6 seed to win the Super Bowl? (Pittsburgh was the first.)
• Will Packers coach Mike McCarthy become the third coach to win a Super Bowl in Green Bay? (Pittsburgh and Dallas are the only clubs to do so, to date.)
• Mike Wallace of the Steelers and Donald Lee and Donald Driver of the Packers all have Mississippi ties. In college, Wallace played for Ole Miss, Lee played for Mississippi State, and Driver played for Alcorn State.
• Will McCarthy use the media to make the officials aware once more of all the fines garnered by Pittsburgh's defense and James Harrison in particular?
• Aaron Rodgers has already sustained two concussions this season and took a nasty blow from Julius Peppers in the NFC Championship Game. Will the Steelers become headhunters in an attempt to knock him out of the game to get to backup Matt Flynn?
• Will a shampoo commercial break out between Packers linebacker Clay Matthews and Steelers safety Troy Polamalu, both known for their long locks?

Reports are out of Dallas that several Steelers have visted live preforming arts establishments(ATH vocabulary for gentelman's Club) this week. Also last night Ben Roethlisberger had a $800 bar tap at a local Dallas bar. This could mean the Steelers might not be ready to play on Sunday if this keeps up for the rest of this week. Last year several Saints made news for staying out late and partying but it had no effect on the game.

The Green Bay Packers are World Champions after defeating the Pittsburgh Steelers 31-25. The Packers win their 13th NFL title and fourth Super Bowl. Aaron Rodgers is the game's MVP (most valuable Player).