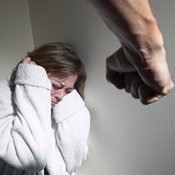 Twenty-four American women and men will become victims of intimate-partner violence in the minute or so it will take you to read this story.

Rape, physical violence and stalking in relationships are much more prevalent than previously thought, reports the Centers for Disease Control in a survey released last week. In comparison to U.S. Department of Justice data on reported crime, the numbers are exponentially higher in some categories, such as rape, which is seven times higher.

"It's difficult to see it in print like that," she said. "... (But from) what we're hearing from the courts and from law enforcement and from advocates, it kind of jives."

The CDC completed interviews for this first "National Intimate Partner and Sexual Violence Survey" in 2010, and the data are culled from talking with 16,507 adults (9,086 women and 7,421 men). The survey elevates domestic violence from crime to a serious public-health issue. Not only are the numbers startling--more than a third of all women and a quarter of all men have experienced violence from an intimate partner--IP violence affects victims' health long after the event. Victims are more likely to suffer from frequent headaches, chronic pain, difficulty sleeping, as well as poor mental and physical health, among other ailments, than those who did not experience such violence.

In 2009, Mississippi ranked No. 23 in the nation for domestic murders, down from No. 5 in 2008, reports the Violence Policy Center, a Washington D.C. non-profit that works to stem the tide of gun violence "through research, advocacy, education and collaboration."

The organization has reported domestic murders in its annual When Men Murder Women reports since 1998. The most recent report, issued in September, uses 2009 data.

But murders are just one end result of domestic violence. More than half the women surveyed by the CDC reported that their intimate partners had raped them. For men, more than half reported an acquaintance had raped them. About a quarter of the women surveyed and 14 percent of the men report being victims of other kinds of physical violence, such as being punched, beaten or slammed against walls.

Stalking--especially through harassing calls and messages--also takes a toll, with 16.2 percent of women and 5.2 percent of men reporting the behavior.