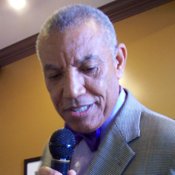 Neddie Winters hasn't seen the movie "The Help" yet, but he's encouraging everyone else to watch it, then sit down and have a serious talk about it. "I'm not sure I have the strength to go see it. But you go--go and talk about it."

Winters, president of Mission Mississippi, was the Friday Forum speaker at Koinonia Coffee House this morning. He told the group about the goals of his organization and shared some of his personal background.

Winters grew up in Tunica County, spending much of his youth chopping and picking cotton. He remembers when his family moved "off the plantation," and he recalls watching construction workers build a private school for white kids not too far from his new home. Like the black women portrayed in "The Help," Winters' mother was a maid who wore a starched uniform everyday to work in a white doctor's house.

All Mississippians should talk about "black pain and blind privilege," he told the crowd of about 40 people. Mission Mississippi, however, specifically targets blacks and whites who claim to be Christian. The organization is all about changing Mississippi one relationship at a time in the name of unity in Christ.

"Until the hurt changes, there's not a lot of other changes," Winters said. "If we are going to eradicate racial (problems), more than the system, more than the law has to change."

In 1968, when he was a freshman at Alcorn State University, he sat outside the financial aid office for days, determined to find a way to afford school. "I was going to learn the system and beat white folks at their games," he said. But he was 18 then. Now, he feels it's more about establishing friendships and understanding that goes beyond mere toleration. It's about helping to change "the hurt."

"We face racial issues on a daily basis. We don't practice what we preach," Winters said.

"After the event, people go back home, then go back to their corners swinging," he said. Blacks and whites return to their segregated churches without exploring the new relationships. The challenge is to keep all congregations interacting and talking about the touchy subject of race.

"Stay at the table long enough to talk about this thing in public," Winters said.

Some people have told him that trying to change Mississippi on such a small scale is too little, too late and not enough to make a difference. He has also heard someone comment that he didn't want to go a meeting where race was all that the group talked about all the time.

An audience member asked about the differences in blacks churches and white churches, citing black church choirs as an example. "We are not about integrating," Winters said. Several people challenged him on that point.

"We believe the results of a warm, welcoming church will be integration," he responded. "You ought to be able to go in a church and not feel like 'I'm out of place.'"

A woman in the group asked about how Mission Mississippi addresses challenges facing young black men, including school drop-out rates and too few jobs. He said the bankers and the others in power sit in church pews Sunday morning. "If they walk in Monday morning and act out what they learn Sunday morning, that can't be a problem."

Winters said that economic development has increased in the 19 communities where Mission Mississippi has chapters. He says it's because blacks and whites took time to know each other and cared about "value investment."

He made a similar comment when asked about the state flag. "When the hearts are right, the flags come down. The heart needs to change."

It's hard to change hearts filled with the "toxicity of hate, anger and rebellion." In both black and white congregations, that toxicity shows up as pain. "Is it turned inward or externally?" he asked.

Interesting, I wonder would Mission Mississippi think that we all should just "wait for hearts to change" before we seek justice and hold this country accountable to live up to its creed that "all men are created equal" and are "endowed by their creator with certain inalienable rights"? I wonder was that Dr. King's message in "Why We Can't Wait"? I can understand and appreciate their efforts, and I can see their point from a denominational perspective. I just think that socially, their thinking and methods would yield more of the status quo of sedimentary inequality being "justified" because people are not "saved" or their hearts are not "warmed" by the Gospel. In the case of racial reconciliation, justice demands that we advocate for people respecting and/or "tolerating" one another before we wait on them to agree with or "love" one another. As my Momma taught me, you ain't gotta love me (that is your choice), but you gotta respect me (at least my rights under the laws of the land and the universe) if we are to live in community, so long as I don't give you a reason not to. Why should I have to wait for someone to decide to love me before I see justice in my land? Evangelically, even the Apostle Paul noted that his liberty shouldn't be at the behest of others' weak conscience.