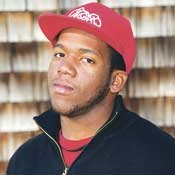 Sam-U-El, aka Samuel Roberson, wants to reach people with his Christian rap.

Samuel Roberson, 18, is an average teenager in a blue, yellow and gray polo shirt with a khaki cap on his head and John Hersey's "Hiroshima" in his hand. He wants to go to college and major in sports medicine. He's a football fan, but he's also a local gospel rapper, Sam-U-El (the way he spells his name for the stage), who wants to share the message of the Bible with the world.

Roberson has known music was part of who he is since he was a toddler. But it wasn't until he was about 14 years old that he started rapping after hearing his cousins, who rapped secular music, write and perform their work.

"I was around my cousins a lot. They would just rap off the top of their heads," Roberson says. "It looked fun. It felt like something I could do."

He decided to go a different route with his content, wanting to reach teenagers with messages about Christianity and faith. Roberson says music is his calling.

"The reason I started gospel rapping is because, first of all, it's teens and youth out there who don't want to listen to the normal church beats," Samuel says. "So I figured if I put some bass and some snares and put the word (scripture) with beats, then they would say 'this is a tight beat. Let's listen to what he's saying.'"

Roberson, the younger of two brothers, is passionate about his music and his spiritual beliefs, and that's evident in his excitement and sincerity when he mentions his music, Christ or the two together. He talks with his hands and smiles something of a boyish smile. A junior at Ridgeland High School, Roberson volunteers in the sound booth at Church Triumphant (713 S. Pear Orchard Road, Suite 43, Ridgeland) and helps supervise The N-Credible Youth Ministry there. Roberson often shares his talents during the fifth Sunday evening services, dubbed "Sunday Night Live," a program hosted by the youth ministry.

"I really feel like this is my calling. When I try to write about something else, I'm not feeling it," Roberson says, sitting at his Ridgeland home with his mother, Diane, and older brother, Mickell.

"When I started putting (scripture) with (the music) and relating it to other things, then it was like 'Oh! OK!' Then it sounded nice."

His mother, Diane Roberson, says she's long since known her son was "different."

"I can't remember when I first recognized it," she says. "When he was younger--he was about 3 years old--he had a plastic microphone. I heard this sound come out, and I said, 'Oh my God! He can sing!'"

But it wasn't until recently when her son started rapping at their church that she recognized rapping specifically, not just music, was his calling. Her greatest dream for him is to share is gift with the world.

Roberson first performed at his church after a church friend suggested he pass his music on to the pastor of Church Triumphant, Tonya Ware. She then passed the CD on to the youth leader, Dierdra Carter. They all apparently like the music because after pulling some strings, they booked Sam-U-el as the opening act for Da T.R.U.T.H., a major figure in gospel rap, who was scheduled to do a concert at the church in July 2008.

"This was my first concert. You're talking to a 14-year-old who just started to get open with rap," he says with a smile. And, he says, he loves every minute of performing.

"People say that when they see me normally, they say 'that's just Sam.' When I perform, they say I turn into Sam-U-el."

Roberson says his pastors, church sermons and gospel rappers like Lecrae and The Ambassador influence him. He's also careful to note how important his mother's encouragement is, even though she only sings in the shower.

The rapper writes his own songs, and says his biggest goal in life is to spread the word of God by "nontraditional" means and reach people. After college, he hopes to make money rapping professionally. In the meantime, the rapper's not ashamed to toot his horn a bit.