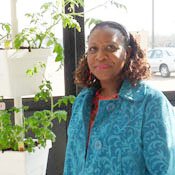 Beneta Burt knows it can be a challenge to change people's behaviors when it comes to healthy living. As project director for the Mississippi Roadmap to Health Equity, Burt promotes systemic, incremental solutions and programs to help fight obesity in the state.

Located in the former New Deal Supermarket on Livingston Road, the Mississippi Roadmap to Health Equity serves as a one-stop program for Jacksonians to have access to healthy foods and exercise. Every Saturday starting May 21, the organization will host a farmers market with local produce. Earlier this year, the W.K. Kellogg Foundation issued the organization an additional grant totaling $3.5 million so it can continue its mission for another five years. The grant provided enough funding for the nonprofit to install a gym in the space, which is open to the public for $20 a month. Jackson Public Schools food-service workers can use the gym at no cost.

"There is no joining fee," Burt says. "We want to give people an opportunity to come on a monthly basis. They pay $20, and if they can't come the next month, maybe they'll come the month after that. The idea is to encourage them systematically by having a place that is accessible and affordable for fitness."

The gym also includes fitness opportunities for children and Zumba classes. Burt said her organization received a $230,000 grant from the United States Department of Agriculture to teach women who receive food coupons through its Women, Infants and Children program how to prepare healthy meals. Burt said she is looking for private sponsors who can help the organization install a kitchen in the former supermarket space.

"We want to encourage young women to start cooking and using this to avoid fast food," Burt says.

The Roadmap will also host a summer nutrition and fitness program for Jackson Public Schools students at Johnson Elementary School this summer.

Burt, 61, is the former president and chief executive officer of the Urban League of Greater Jackson, a civil-rights organization that focuses on economic empowerment, where she initiated job-training programs for disadvantaged workers and developed a community technology center. In the 1980s, she served as the director of the Governor's Office of Economic and Community Development under former Gov. Ray Mabus.

"If there is a way in which I can have an influence on healthy choices in whatever kinds of buildings or businesses that come to the city, I try to have a voice for more healthy options," Burt says.