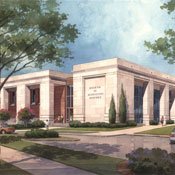 An artist's rendering shows the planned Museum of Mississippi History.

Mississippi's lawmakers may have approved $20 million in bonds for a state civil-rights museum last week, but the project still has major hurdles to clear before becoming a reality. Chief among those is a private fundraising effort, the same thing that doomed an earlier incarnation of the project.

Legislators approved H.B. 1463 earlier this month at the behest of Gov. Haley Barbour. The bill authorizes $20 million in state bonds for a civil-rights museum in downtown Jackson and another $18 million for an adjacent state history museum, with the funds for both also meant to cover the cost of a shared parking garage.

For the civil-rights museum, however, the bill specifies that the Mississippi Department of Archives and History can only spend bond funds on pre-planning and construction. Funds for acquiring and stocking the museum with artifacts will be harder to come by.

The bill specifies that the state cannot issue any bonds to fund artifact acquisition until MDAH provides proof that an equal amount of private, local or federal funds are available. To meet that matching requirement, MDAH likely will need the help of a private fundraising campaign, said Hank Holmes, the agency's director.

The new history museum already has a private benefactor in place: Since 2005, the Foundation for Mississippi History has raised funds for the Eudora Welty House, the Old Capitol Museum and the proposed Museum of Mississippi History. Holmes said the civil-rights museum, though, would likely need its own outside fundraising authority.

"(Fundraising) cannot be totally under the auspices of the department, to talk about that kind of money that we probably will need for the match," Holmes said.

"I am in hopes that there will be a civil-rights museum foundation established also. We need the outside assistance of those kinds of groups to raise the money."

The need for private fundraising stalled the previous effort to build a civil-rights museum. Barbour first appointed a commission to oversee the proposed facility in 2006. That effort foundered after the commission awarded the museum site to Tougaloo College, however. When Barbour restarted the effort this year in his annual state-of-the-state address, he asked legislators to fund a museum specifically in downtown Jackson near North and Amite streets and adjacent to the planned state-history museum.

After Barbour's announcement, Tougaloo President Beverly Wade Hogan released an incendiary statement suggesting that the governor was responsible for letting the project die by not appointing a non-profit board to oversee fundraising for construction.

"Following the action by the commission and acceptance by the governor, the governor was to appoint a board of directors that would form a non-profit organization to organize the construction, funding and operation of the museum," Hogan said. "To my knowledge, this part of the process has not been fulfilled."

Holmes said that he hopes that artifact donations will minimize the cost of filling each museum with exhibits.

"We have always depended on donations of artifacts," Holmes said. "We have very rarely had any funds to purchase anything. We're hoping that that philanthropic spirit will continue, and people will want their artifacts to be housed in the museums."

Construction should begin within two years, Holmes said. The Department of Finance and Administration oversees all state buildings and would select an architectural firm to design each facility.