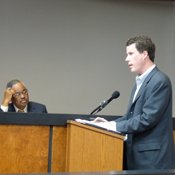 Spokesman Dallas Quinn told the Levee Board today that McGowan Working Partners and the Two Lakes Foundation are on board with a smaller one-lake plan, and will assist in moving the flood-control project forward.

The Two Lakes Foundation is proposing both a name change and a new partnership with the Rankin-Hinds Pearl River Flood and Drainage Control District.

The foundation, which has for years sought to convince the Levee Board to support a proposal to dam the Pearl River and create two massive lakes south of the Ross Barnett Reservoir, now proposes to partner with the board in its pursuit of a smaller lake plan that does not flood portions of Mayes Lake, park property or the wetlands north of Lakeland Drive. It also proposes to change its name to the Pearl River Vision Foundation.

Dallas Quinn, spokesman for Jackson oil man and foundation founder John McGowan, made the announcement minutes after U.S. Army Corps of Engineers Project Manager Gary Walker told the board that it could take a minimum of five years before the first shovel begins turning dirt on new flood control along the Pearl River between Hinds and Rankin counties.

"You heard (Walker) say it could be three years to conduct the (flood control) study, and another two years to complete the funding. That puts us at five years before we'd even know we could start building," Quinn told the Jackson Free Press. "We propose this team of engineers, consultants and attorneys to sit down with the Corps and the board and negotiate (the flood-control plan), and look at any other alternative (funding) routes to move this forward as well."

The Levee Board is already trying to discover a means to fund a $4 million flood-control study, which contains possible components of a small lake, levees or a combination of both. The federal government would finance roughly half the cost of the plan, and could fund up to half of the actual cost of the construction of the flood-control project. However, board President Gary Rhoads pointed out that he had recently visited Washington, D.C., and said that funding for the federal government's half of the cost is looking harder to come by since earmarks have "become a dirty word" in Washington.

The Pearl River Vision Foundation is a nonprofit containing John McGowan of McGowan Working Partners and engineers Michael Goff of Wildlife Technical Services Inc. and Willie O'Neal of Sol Engineering Services, among others. Attorney Sam Begley is also working with the nonprofit, which intends to provide, "at no cost to the district, engineering, scientific and other consulting services."

The foundation also proposes to "assist and represent the district in negotiations with the Corps to devise an updated" flood-control plan. In exchange, the foundation seeks from the district "all applicable reports, studies, site characterizations, drawings, regulatory orders and similar information," which could be either in the district's possession or in the possession of its contracted attorneys or engineers.

Members of the board voted unanimously to support the resolution recognizing the foundation as an assisting organization. Board member Harvey Johnson Jr. requested a clarification from board attorney Keith Turner that the resolution merely arranged for future meetings to discuss the partnership, and that today's resolution made no partnership official.

Begley said the foundation's partnership proposal could not have happened last year, because the board and the foundation were not on the same page as to the shape or size of the proposed lake.

"What changed? The receptivity of the board. This (flood-control) design is what the board wants," Begley said. "They are the government, and you have to respect their wishes."