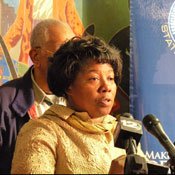 The Mississippi NAACP isn't using the "L-word," yet, but the civil-rights group has its doubts about the Dec. 2, 2010, hanging death of a Greenwood man. Last week NAACP President Derrick Johnson called on federal authorities to investigate the death of Frederick Jermaine Carter, citing a state autopsy report that he said refuted initial rulings by local law enforcement that Carter committed suicide.

At a March 31 press conference, Johnson referred to Carter's death as a "murder," but he struck a more ambivalent tone otherwise, saying that a newly released autopsy report illustrated the need for further investigation.

In his March 21 report, State Medical Examiner Adel Shaker ruled that Carter died by hanging but declined to stipulate the manner of his death, citing "[p]ending investigation." Shaker noted no bruising or other unusual trauma to Carter's body inconsistent with hanging, but Valerie Hicks-Powe, attorney for Carter's family, disputed Shaker's account.

"There is evidence to support that this is not a suicide," Hicks-Powe said. "I examined his body myself. I know for a fact there were (bruises on his body)."

When asked where the bruises were located, Hicks-Powe declined to offer details. She focused on what she alleged was a lack of cooperation from the state crime lab, which she said has withheld portions of the autopsy report and Carter's personal belongings.

The report Shaker released to Carter's family does not include a toxicology report or pictures of the autopsy procedure. Hicks-Powe said that both are necessary to complete a second autopsy that the family has requested.

Banks said he still believes Carter's death was a suicide, based on his department's investigation. Sheriff's deputies found a portion of the hanging rope in Carter's pocket. In addition, the only DNA found on the rope was Carter's. Deputies found no footprints other than Carter's around the scene of the hanging. Carter suffered from schizophrenia, and family members said he had attempted suicide on two prior occasions, Banks said.

Hicks-Powe contends that Banks was unaware of Carter's mental history when he first described the hanging as a suicide. "We don't deny Mr. Carter had mental challenges," she said. "What we're saying is they didn't investigate this to determine whether those had anything to do with his death."

Two workers found 26-year-old Frederick Jermaine Carter's body Dec. 3 hanging from a tree limb in predominantly white north Greenwood. By Dec. 4, Banks had told media that Carter's death was an apparent suicide, although he added that further investigation could prove him wrong.

Sen. David Jordan, D-Greenwood, said at Thursday's press conference that he visited the crime scene with Banks on Dec. 4 and saw that deputies had not secured the area with police tape. Jordan went so far as to allege that by allowing contamination of evidence, local law enforcement had engaged in a cover-up. "There is some pretty valid belief that it was done elsewhere and brought there," he said.

Carter, who was African American, worked with his stepfather on a painting job in the area on Dec. 3. He wandered off after his stepfather left to pick up more supplies.

Greenwood police responded to the scene first and contacted the FBI. Because Carter's body was found outside Greenwood's city limits, the Leflore County Sheriff's Department took over the investigation.

The sheriff told the Jackson Free Press that the FBI assisted deputies in their investigation of Carter's death, but the federal agency has not launched its own investigation.

The State Medical Examiner's office performed an autopsy Dec. 5 and, on the following day, shared its results with Leflore County Coroner Debra Sanders, who also ruled Carter's death a suicide.

Carter's mother, Brenda Carter-Evans, pleaded with state authorities to release his personal items or initiate an independent investigation. "Not knowing what happened is a torment," Carter-Evans said. "I need to know what happened to my son."

Unless I read the story wrong there seems to be no evidence found by people trained to do that sort of thing to support this claim. Furthermore, it seems unnecessary to mention that he was found hanging in a predominantly white neighborhood given the fact that there's nothing to support any kind of foul play. On the otherhand, his family says he attempted suicide on two other occasions so I guess what I'm getting at is ... why is this news? And in my opinion it seem somewhat sensaitonalized at that given no proof of anything other than people trying to stir something up.