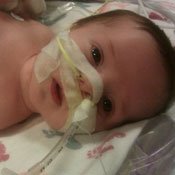 Almost one in every 100 babies is born with a congenital heart defect. Team JFP will walk in the Heart Walk Oct. 10 in memory of Baby Pierce who died at less than 3 months old.

Pierce lay motionless in her arms, with his little Mohawk hair, dark brown and full. "I got to see his face," says Leah Helms, 33, about what she remembers most vividly in the final moments of her son's life. "I'm glad that we got to have that moment. ... (My husband, BJ, and I) were both just speechless ... how pretty to see his nose and mouth and face."

Pierce Allen Helms, or Baby Pierce as he had become known, had been running on fumes those last couple of days.

Pierce's lungs, damaged and full of holes from the ventilator, couldn't be repaired through surgery. And because of sepsis, a whole-body infection, he didn't qualify for a double transplant.

Baby Pierce was born with congenital aortic stenosis, an abnormal narrowing of his aortic valve. Infant (younger than 1 year) death rates are 36.5 per 100,000 white infants and 52.5 per 100,000 black infants, the American Heart Association reports.

Although a large part of the AHA efforts concentrates on adults, it also funds research to find ways to detect congenital heart defects sooner and give children a longer and better quality of life, Elaina Jackson of the AHA of Jackson said.

Dr. Jorge Salazar, chief of congenital heart surgery at the University of Mississippi Health Care, performed the state's first arterial switch on an infant in August.

Since joining UMMC in April, Salazar, 42, has performed 55 successful heart surgeries on children. "I'm really excited for the other kids in Mississippi because they don't have to leave their state anymore. They get the same high-quality care at home," Salazar told the JFP in September.

Prior to Pierce's birth on Oct. 26, 2009, the Helms family had no indication of what lay ahead. Leah had a smooth pregnancy and four prior births of healthy babies.

"We never knew anything was wrong. ... I was thinking everything was fine," Leah said.

Things changed, though, after she delivered. "The nurse said ... 'We think he has a murmur. When he's breathing there's just this little growling sound,'" Leah said.

Pierce was transferred from River Oaks to UMC for surgery, but went into congestive heart failure and respiratory failure. He was then airlifted to the Children's National Medical Center in Washington, D.C., for additional surgery on his heart.

"We were just in shock. You hear about this kind of stuff, you read about it, but you just don't think it's going to happen to you," BJ said.

Over the next two months, Pierce's condition worsened, and it became evident that he would need a new heart. Pierce was transferred again to Arkansas Children's Hospital in Little Rock, arriving New Years Day.

"Just the agony of waiting and wondering and not knowing--it's a miserable, miserable feeling," BJ said.

"It was a long journey," he continued. "... I've been to combat ... I mean I wasn't just over in a country typing papers. I was (on the) front line, kicking in doors. And that doesn't compare to the stress of having a child on a transplant list, being that critical."

Baby Pierce had been through so much--pulmonary hypertension, premature ventricular contraction (misfiring of the heart), infections, ventilators, blood clots, transfusions and heavy sedation--his body just couldn't handle the constant strain. On Jan. 15, Leah broke the news on her online journal.

"My little Pierce got his angel wings today around 3."

Through teary eyes, BJ said, "I know he's in heaven. He's whole again, not hurting. That's how I get peace with it. Every day I miss him, and I'll always miss him."

BJ and Leah live in Brandon with their children Katie, 13; Peyton, 6; and Patrick 2. They lost their son Jonathan, who would have been 9 this year, in a 2003 car accident.

The Helmses don't want other Mississippians to go through what they did; they want to bring awareness. And although they wonder if the outcome would have been different if a pediatric cardio unit had been in Mississippi for Pierce, they are glad it's here now.

"I think there was more of a lesson than just to have Pierce and lose him. ... God does everything for a reason. We might not understand it at the time, but you have to listen to him and keep on going." Leah said.

This year, the JFP will walk in memory of Baby Pierce. Last year, more than 3,000 people raised more than $300,000 to fund heart research and educational programs.

The American Heart Association's 2010 Metro Jackson Start! Heart Walk is Sunday, Oct. 10, at 2 p.m. with registration at 1 p.m. The free event features a kid's zone, music, health information, a one-mile route for heart disease and stroke survivors, and a free, heart-healthy lunch by Subway. Pets on leashes are welcome.

Sign up at metrojacksonheartwalk. kintera.org/teamjfp to join team JFP. For more information, contact ShaWanda Jacome at [e-mail missing], or call 601-362-6121 ext. 16.