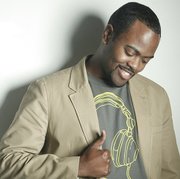 When Sherman Green—known as S. Green in the music business—was in graduate school at Mississippi State working on a degree in counselor education, he fell in love.

"She made me smile. I could see her heart across the room. She was beautiful inside and out, and I could just sit and look at her, or I wanted to lay on her, kiss her, love on her," he says.

Around that time, he wrote the song "Adore," track eight on his first album, "Speaking From My Heart," released this year. Since then, Green and his girlfriend have broken up, but love, he says, doesn't change.

Green, 28, graduated from Callaway High School. His musical story is unlike many R&B singers who claim to have started singing before audiences before they could barely walk or speak. He started singing when he was 14.

"I could sing before then," he says, "but I kept it to myself. I didn't think it was a big deal."

A friend of his suggested that he join the choir at Callaway, and Ms. Marquise Ezell,the choral director, changed his musical life. "She took what I had and brought it to a new level. By my senior year, I was performing at all the assemblies," he says.

He sang R&B boy group 112's 1996 hit "Only You," and the girls went wild. Green knew then he wanted to do something with his talent.

While at MSU, he spent his time sing- ing at school events and with the university's various choirs. He even competed in the campus' "American Idol," which, he says, he "lost on a technicality."

That didn't stop him, though. R&B, Green says, is real music. You can't escape it.

"It's love, pain; it's romantic, shows howyou feel ... it gets you through good and bad situations," he says. And that's why on his own album—the one that took two years to perfect—he didn't resort to the gimmicks so many mainstream artists do today.

Along the way, Green says, it became acceptable in the industry to draw attention to a song's slick production and distract from a singer's talent and lyrical content. Though not dubbed an R&B group, D4L's commercially successful "Laffy Taffy" is the first example that comes to the crooner's mind.

As another example, Green points to the more recent "LOL Smiley Face."

"It's a song about text messaging! That's not what R&B is about," he says.

One of Green's most significant musical heroes, Luther Vandross, didn't rely on trickery, he says.

"He had a gift, and he gave all of him- self to the audience. He sang. He entertained. Like Babyface, Stevie Wonder, Patti Labelle (and Mississippi native) Alexander O'Neal," Green adds. "People really don't recognize his talent."

To those who claim R&B is "women's music," Green calmly makes it clear: "If you're a person with feelings and emotions, R&B applies to you.

"Guys are supposed to be macho, rough around the edges. We aren't supposed to cry. But even a guy, I guarantee if he puts in my CD, I'd guarantee him that there's at least one song that reminds him of something he's gone through.

With songs like "There it Goes" on the tracklist, Green's probably right. "There it Goes" is a song about a love lost, if you can call it that. In it, the singer laments a lovehe thought he'd found that left him alone: "There it goes/another love down the drain/ another broken heart with all the hurt and all the pain."

Who hasn't been dumped once or twice?

When he's not singing, Green works as an academic adviser at Jackson State Univer- sity. It's a job he says he enjoys, and he antici- pates beginning doctorate soon. But if given the opportunity to make his music career full- time, the singer would undoubtedly take it.

"I'd like to be independent for a while and show record labels what I've accom- plished on my own," he says. "I want them to see what I'm doing and then take me to another level," he says.

So between now and a doctoral degree, or now and a contract with a record label— whichever comes first—Green is content to continue perfecting his singing voice, per- form whenever he's offered an opportunity, and gather more material to make music based on the ups and downs of life, love lost and maybe, by his next album, love found.

Find S. Green's album "Speaking From My Heart," on iTunes, Amazon, Napster, mp3. com or visit his website (http://www.sgreenonline.com) to order it, if you'd prefer a hard copy.

S. Green Says...
The perfect Saturday evening playlist for S. Green would include:

• John Legend, "Stay With You"

Alicia Keys is a primary example of an entertainer who has matured right before her audience's eyes but still has integrity in her music. "She looks so different now than when she first came out. Her music has changed. Her image has changed. She's attractive. She's very, very attractive," he says.

While he missed the grand prize—an all-expense paid trip to audition for the "American Idol" in Memphis—when he lost Mississippi State's version of the competition, S. Green recorded "Speaking From My Heart" in Memphis with producer Richard Rankin.