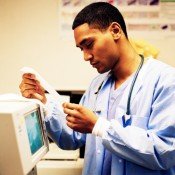 It's been almost six months since President Obama signed the health-care reform bill into law, and lately much of the news focused on how unpopular the bill is, and how President Obama is talking it up in advance of midterm elections.

But politics aside, several provisions of the bill are already in effect, according to an implementation timeline by the Kaiser Family Foundation. They are:

Teens and young adults may stay on parents' health plans until age 26 .

No more denying children coverage based on pre-existing conditions (Extended to all age groups in 2014).

No more limits on how much an insurer pays out on coverage for a consumer's lifetime.

Restrictions on annual limits on how much an insurer pays out on coverage. (Annual limits to be eliminated altogether in 2014).

No more rescinding coverage for sick consumers based on accidental application errors.

Insurers must come up with and implement an improved appeals process for consumers to appeal decisions.

As we've noted, insurers have already tried to, where they can, avoid bearing the full brunt of some of these provisions. In some states, insurers--citing industry-wide uncertainty about the effects of health care reform--have stopped writing new child-only insurance policies, and they're catching some heat from lawmakers for it.

Consumers should also be aware of the fine print attached to some of the provisions going into effect this week, as USA Today noted.

Some provisions--such as the preventive care provision and the appeals process provision--do not apply to so-called "grandfathered plans," which Dow Jones describes as plans to which employers and insurers have only made minor changes, in order to avoid having "to comply with all the new regulations right away." Consumers are supposed to be notified if they have grandfathered plans, but they can also ask about to be sure about the status of their policies.

Some of the confusion about the reform bill's functionality and effectiveness may be due to frequent reports of rate hikes by insurance companies that attribute their actions to the cost of the reform bill.

Earlier this month, the Obama administration warned insurers against attributing "unjustified rate increases" to the law. The administration has promised to provide
$250 million to states over the next five years to help states better police such rate hikes.

Not all states, however, seem to have the necessary enforcement capability to keep up with the law's new requirements, and many are scrambling to get it from their state legislators, according to The New York Times. (Arizona Governor Jan Brewer, it's worth noting, said her state had "no plans to adopt rules related to enforcement," but her state still applied for funds to help it do so. Arizona is hardly the only one to sue the federal government for the law while claiming its subsidies .)

But for consumers in states that are looking to enforce the law and crack down on rate hikes, what happened recently in North Carolina may provide some encouragement. Blue Cross Blue Shield of North Carolina this week announced it would be refunding $156 million to more than 215,000 of its individual policyholders, after state insurance regulators scrutinized a rate hike request and found the insurer was collecting reserves to pay claims beyond 2014. (Brad Wilson, the insurer's president and CEO, told USA Today that the insurer "maintained this money on behalf of our customers " in order to stabilize monthly insurance payments over time.)

Insurers, meanwhile, are hanging tight as they await decisions from state insurance regulators regarding a critical part of the bill for them--what's known as a medical loss ratio .

According to a piece in Bloomberg today, the health care law requires that insurers at least 80 percent of their premiums on medical care, a measure intended to rein in administrative costs. The National Association of Insurance Commissioners was supposed to agree on how to calculate the figure back in June, but has not yet done so. Several members met with administration officials today to discuss the issue, The Hill reported.