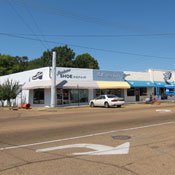 Several road closures will occur during the filming of "The Help" this week.

The city of Jackson released the following statement about street closures during the filming of "The Help" in Jackson: (verbatim statement)

Filming on Thursday morning will be along State Street between Mitchell Avenue and Hartsfield Avenue. Filming on Thursday afternoon will be at the State Capitol. The closure and restrictions are as follows:State Street will be closed from Fondren Place to Broadway Avenue from 5 a.m. to 2 p.m. A detour will be posted along Fondren Place, Old Canton Road, Galloway Avenue and Broadway Avenue.

Parking on State Street will be prohibited from Wednesday night until conclusion of filming Thursday afternoon.

Duling Avenue will be closed from Morgan Place to State Street from 5 a.m. to 2 p.m.

Mitchell Avenue will be closed from Oxford Avenue to State Street from 5 a.m. to 2 p.m.

Filming on Friday morning will be in Greenwood Cemetery.  Filming at the Mayflower Cafe on Capitol Street and Roach Street.  The closure and restrictions are as follows:

The southbound right lane of West Street will be closed from Davis Street to George Street on Friday morning.

Capitol Street and Roach Street will be closed intermittently for exterior filming by JPD officers.

Riddle me this - does it seem like the movies that have been flmed here have this dusty, folksy tone to them where it seems like we are stuck in the days of chewing on straw, wearing overalls, walking barefoot, driving and walking on dirt roads, and everyone just about drives a truck, the whites stay in civilized parts of towns and the blacks stay in the row houses and shanty shacks? Don't get me wrong, I am glad for the state receiving the opportunity to film here and employee locals, but I just think some of the films that have been filmed here - seems to uphold or maintain a certain type of stigma the rest of the country views Mississippian's? Is it just me or does anyone else feel that way too?