The Night the Sky Didn't Fall 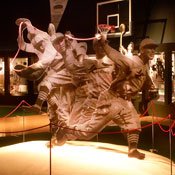 As a former history major and a sports guy, I found the Mississippi Sports Hall of Fame, with its many exhibits and stories about the past, a fascinating place to hang out. During my recent—and first—tour of the hall, Executive Director Michael Rubenstein showed me some of its best pieces. And naturally, the stories at the Wall of Memories drew my attention.

One of the pieces Rubenstein pointed out was a candy wrapper, which turned out to be one of the first-ever athlete endorsements.

Mississippian W.E. Bucky Moore from McComb was a football star at Loyola University New Orleans. It was there that he led the 1926 team to an undefeated season; they lead the nation with 355 points and held opponents to only 20 points. Nicknamed the Dixie Flyer, Moore broke all of football great Red Grange's records with 1,331 yards and 89 points in 1926. He was so popular, Elmer's Candy Company named a candy bar after him: Dixie's Best.

Throughout the hall are interactive kiosks where a visitor can watch video highlights and interviews of Mississippi's greatest athletes from nearly every sport, like Walter Payton. If you are a fan of memorabilia, check out the early 20th century wool baseball uniforms. The Hall of Fame also features a collection of Dizzy Dean memorabilia. Dean's late wife, Pat Dean, donated the items that include his 1934 World Series and Hall of Fame rings.

But the display that really caught my attention is immediately as you walk in the door. This exhibit tells the story of the 1955 Jones County Junior College Bobcats football team.

Jones finished the 1955 regular season undefeated and hoped to get an invite to play in the Junior Rose Bowl in Pasadena, Calif. The year before, another Mississippi junior college team—Hinds—had played in the same game and defeated El Camino Junior College.

JCJC received a bid to play the Compton Junior College Tartars with much hoopla and fanfare. Then-Lt. Gov. Carroll Gartin, a Jones alum, said he would travel to Pasadena as the school's number-one fan. But everything changed for Jones when officials discovered that Compton had black starting players.

At that time, no Mississippi college or university had played an integrated team in any sport, and there was an unwritten rule barring teams from doing so.

Media around the state put pressure on the Bobcats not to play the Tartars. In a front-page editorial, Major Fredrick Sullens, editor of the Jackson Daily News, called for the Mississippi Legislature to deny funds to Jones from the biennial junior college appropriations if they accepted the bid. Even the school's band was affected, and the Covington County Board of Supervisors withdrew its support.

The Chamber of Commerce of Pomona, Calif., stepped in and sent the band a check for $250 for travel expenses. Instead of well wishes for a national championship, Jones was hit with a parting shot by Sullens.

He wrote: "A defeat will not cause mourning in our home state. The decision to play against Negroes is the most unfortunate thing to happen since the infamous Supreme Court ruling. Nothing but avarice and cold-blooded greed for a share of the gate receipts could have promoted such action."

Jones was not out to make a political statement or upset the status quo. The Bobcats only wanted to play for a national championship and to decide, on the field, which team was the best.

The press spoke with Bobcat co-captains Kenneth Schultze and Paul Hathcock at the time. "As long as the rules of junior colleges say that Negroes can play, we're gonna play 'em," Schultze said. "Each Negro is just another ball player, and we are not worried about who is on the team."

"It's an honor to play in the Junior Rose Bowl," Hathcock added. "I have no objections whatever to playing a team that has Negroes on it."

Jones lost to Compton 22-13 that December night in front of 57,000 spectators in a clean-played game that featured no personal fouls or racial bitterness. In Mississippi, the sky did not fall, and the sun came out the next day.

Eight years later, in 1963, the Mississippi State University Bulldogs sneaked out of state under cover of darkness to play Loyola University Chicago in the NCAA basketball tournament. The Bulldogs had won the SEC for the third year in a row but had declined to go to the tournament the first two years.

While MSU decided to hide from controversy and sneak out to do what was right—even with 85 to 87 percent of the student body in favor of going—Jones faced criticism head on and played for a title anyway. The Bobcats did not win a national title, but the team did show far more intestinal fortitude then its peers of the same time period.

I would encourage everyone to vist the Mississippi Sports Hall of Fame. The things to see there were great and it provides a wonderful look into Mississippi's athletic past.