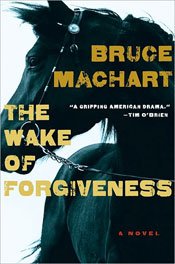 Bruce Machart's debut novel "The Wake of Forgiveness" (Houghton Mifflin Harcourt, 2010, $26) is a journey down a path of loss and pain, into the emergence of hope and peace.

The novel follows Karel, the youngest son of a Vaclav Skala, a Czech farmer in Dalton, Texas. Karel's mother dies at his birth in 1895, leaving his father an angry man. Vaclav blames Karel for his wife's death and never once touches him, not even in anger. Karel keenly feels his father's rejection and his older brothers' teasing.

Together, the Skalas farm, breed racehorses and yield to their pain and loss. Vaclav forces his sons to plow, reserving the horses for racing, yet Karel becomes a fine rider.

When Karel is 15, the Spaniard Guillermo Villaseñor stuns Dalton by betting his three daughters as wives for Skala's oldest sons in a horse race with Karel, the youngest Skala boy, and Graciela, Villaseñor's third daughter, riding. Karel encounters Graciela and falls helplessly in love with her.

Machart writes in an easy, loping manner, his writing style mimicking the gait of a calm, powerful horse. His metaphors are achingly true and fresh, and his characters shine with realism.