Changing the Face of Highway 80 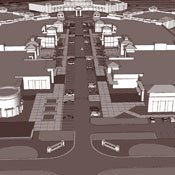 The Central Mississippi Planning and Development District and the city of Jackson proposed multiple projects along the Highway 80 corridor last week, including Showtown West, above, which could change the face of the entire corridor.

In 10 years, the Highway 80 corridor will look nothing like it does today if the city of Jackson has its way.

Jackson Mayor Harvey Johnson Jr., unveiled the city's comprehensive plan for the Highway 80 corridor last Thursday. He joined the Central Mississippi Planning and Development District in proposing a series of development projects, including industrial parks, residential areas, parks and bike trails along the Highway 80 corridor between Terry Road and the Metrocenter Mall.

"Highway 80 is going to be our shining star," Johnson told a crowd of about 70 at the Battlefield Park Community Center in Jackson. "It's going to be something that we can all be proud of, whether you have a business or a residence there. A few years from now when you look back on this meeting, and you can say, 'I was there when they unveiled the future,' or you can say, 'I didn't like the way it was going and had a voice in making it better.'"

CMPDD, which is working with the city in developing the area, revealed a host of development proposals touching on every mile of the corridor between Terry Road and the city's corporate limits bordering the city of Clinton. District representatives showed audience members jazzed-up renditions of future developments such as Showtown West Neighborhood, a section of Highway 80 between Westhaven Road and Morson Road that once contained the long-gone 1950s-era "Showtown West" drive-in theater.

CMPDD suggests that the largely undeveloped section could contain a shopping area and a scenic park with multi-use trails and a lake.

The city of Jackson also suggested development possibilities for territory near Puckett Machinery. The city says the section could serve as an auto park or equipment sales destination, coupled perhaps with an office park on the west side of Highland Drive. The area could also conceivably feature an access point behind the Saks Operations Center, near the Interstate 20/Highway 80 intersection.

CMPDD also introduced a name for a residential component of the proposed Metrocenter Mall development, which developer David Watkins is spearheading with the city of Jackson. Watkins is trying to coax Jackson Public Schools to move its administrative offices into the second-floor section of a vacant anchor store inside the largely underutilized Metrocenter mall, which he says will trigger an influx of new spending in the area that could eventually pave the way to an invigorated mall and surrounding businesses. Watkins hopes to attach a new multi-screen movie theater to the mall, and build an indoor water slide.

The Jackson Public Schools Board of Trustees is currently debating the prospect of the move, which will most likely generate new sales tax revenue and increase the district's coffers, but it will also cost the district $1 million a year over the next 20 years in renovation and leasing costs under Watkins' proposed lease-to-own plan. Watkins, a former JPS board attorney, argues that the $20 million cost will still be less than the district's cost for upkeep of its current buildings.

The city plans to build upon the growth of the mall, and has already purchased mall property. However, the city also wants to see a new lifestyle shopping center directly adjacent the revamped mall. The development, Metrocenter South, will provide an open-air shopping center similar to the Dogwood development in Flowood.

City development leaders, such as Jackson Planning and Development Director Corinne Fox, say they have high hopes for the area, thanks to its easy access to area interstates, including 220, 20, and 55.

Fox points out that much of the infrastructure for the development already exists, particularly regarding the proposed Metrocenter and Southport Mall Entertainment Center at the site of the abandoned Mississippi Department of Environmental Quality headquarters at the corner of Highway 80 and Ellis Avenue.

"This location is one of the most convenient locations in the state," Fox told the Jackson Free Press. "From here, you can go just about anywhere in the country."

Fox added that the potential for development at the Southport Mall location was particularly high, considering the location is already consolidated under one ownership group. CMPPD suggested a development plan for Southport consisting of entertainment venues for college students connected with nearby Jackson State University. The area could also boast a park connected to the Champion Community Center and a multi-use trail (called the Little J), which would evolve from an unused railroad track vanishing into undeveloped green space and nearby neighborhoods.

Mark Fields, co-owner of the proposed site of the Southport Mall Entertainment Center, said he and his partner are eager to aid in development.

"We're ready to move on this," Fields told the JFP. "We're a new owner of that mall, and we've not had time to sit down and assess what we'd like to do with it. But if somebody has some ideas for the area we're certainly not going to stand in the way. We'll either work with them or sell our interest in it."

Johnson told the crowd that the city is already investing in a new JATRAN bus facility on the corner of Valley Street and Highway 80, and is working to expand and widen other streets in the area, including the Lynch Street extension stretching behind Puckett Machinery, all the way to the Interstate 20 intersection. Johnson said he also wanted to see developers adopt the unused Coca-Cola bottling facility, along Highway 80, which he said would make a great multi-use or office suite facility.

"Already, people are thinking about trying to get this project moving, and the city is already doing its part to make sure this project hits the ground running," Johnson said.

Looks really exciting. There's so much on the horizon that's about to happen in Jackson that it's really hard not to get excited about. Who knows, Jackson could be the envy of other cities its size around the country.

"Exciting news! I really wish I could enlarge that rendering..." I was looking for it on CMPDD's website but couldn't find it. However, this pdf file has more information about the project: http://www.jacksonms.gov/home/hwy80/pdfs/newsletter-summer2010.pdf The first thing the document talks about is landscaping the 80/220 interchange. That sounds great, but they should consider also building a flyover bridge to eliminate the left-turn from 80 West to 220 South. In fact, as part of this upgrade, they should consider turning 80, or at least this stretch of it, into a full-blown expressway, with one-way service roads and slip ramps.

I find all of this incredibly exciting. I am already a fan of the young trees planted near the off ramps and the new medians, which have alternating swirling colors of terracotta and gray. I've never seen those colors used that way on a median before, and I would like to see it in other parts of Jackson.