Anything but Ordinary: Adam and Allison Hudson 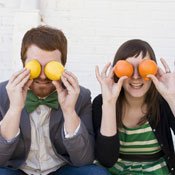 Adam and Allison Hudson are not your ordinary couple. In fact, they "despise the ordinary" so much that they made it their motto for life and business. So it makes sense that they run their successful photography business, Adam Hudson Photography, in quite the unordinary fashion.

The 26-year-old Mississippi natives (Allison from Hattiesburg, Adam from Canton) started their photography business about four years ago, right around the time of their own wedding. Despite their four-year marriage, the couple still act like newlyweds, constantly giggling at each other's comments and finishing each other's sentences.

Wedding photography appealed to the couple. "There are so many elements; photojournalistic, portraiture, and everything's just happening so fast," Adam says. "I think after the first wedding that we shot, I was hooked." For the first few years of their business, they shot weddings exclusively.

Impressing Allison
Adam was similarly hooked when he met Allison at Space Camp in Jackson when they were 13. They were chosen out of the group of campers to be "astronauts" and spend the week in the space capsule. From then on, it was love.

After years of dating, one day Adam drove to Hattiesburg, woke Allison up, threw some clothes in a bag for her and surprised her with a trip to Irving, Texas.

"They have kind of like a riverwalk, with a bunch of canals," Adam says. "We were supposed to do a gondola ride that night, but we got there. and the wind was blowing about 50 miles per hour. It was ridiculous."

After hours of waiting for a gondola ride, Adam grew restless, got down on one knee and proposed. The gondola ride was back on the agenda for the next day, and Allison was still thoroughly impressed.

"He pre-wrote a message, and they put it in a bottle, and they had it floating out in the water. And the little gondolier floats us up to it and was like, ‘Oh what's that? You should get it out of the water.'

"It was really sweet, he did a good job," Allison says.

Choosing Clients
Despite having such a romantic proposal story themselves, Adam and Allison have a hard time choosing a favorite proposal story from among their clients because "every single one of them is unique, and I think the proposals are, too," Adam says.

The couple's clients are so interesting because, unlike most photographers, the Hudsons have a selection process for clients. A few factors affect whether they choose a couple, but what helps them decide is how they feel about the couple.

"We're not going to pick a client that we can't see ourselves being friends with," Adam says. "But that doesn't mean that we can't have differences. Some of our clients' political, religious views—all of that—is just completely opposite from what we are, but we still love them as people, and we still get along with them and are great friends with them. So we say if we can't be friends with them, we won't select them as clients."

The selection process also allows the Hudsons to make a personal connection with the clients, which is what their photography is all about. To Adam, "Photography is such a personal thing. If there's any disconnect between the couple's style and the photographer's style, then you're not going to give them what they want."

With Adam Hudson Photography, personality is everything. They try to get to know their clients' likes, dislikes, wants, needs, history and what they hope to get out of their wedding pictures. They spend hours scoping out the right locations for engagement shoots, mainly in the downtown area. "I love downtown. I really love the juxtaposition of taking a beautiful bride in a stark white dress and putting her against some derelict building," says Adam.

Getting to know a couple's style and personality is important to them and working as a team helps them get a clear idea of the couple as a whole.

"We may have the same style but a different way of getting there. I have a social working background, so I'm more emotional with my images," Allison says. "I really strive for that personal connection, whereas Adam sees things for technical reasons or because he just feels like it looks like a good shot. So we shoot different things throughout the day then we put it together as the full package."

They also go as far as to use props, if they feel it fits the couple's style. "One couple we had in Louisiana, for some reason, really loved oranges and lemons. It just matched their style, so we had to go get some of those," says Allison, who also gathers the props, schedules shoots and verifies appointments.

Aside from having to supply citrus, the Hudsons have had little drama in their business. They have no juicy "Bridezilla" stories, and the worst issue Adam recalls is a disagreement between a bride and her mother.

"I think that if we have any sort of roadblock, it's that mothers of the bride sometimes don't quite get our style. Or every now and then, we'll have some of the officiates of the church or some of the little church ladies that just aren't quite used to it," he says.

Breaking Tradition
One of the things the "little church ladies" have a hard time understanding is that Adam and Allison will break the age-old tradition of grooms not seeing the bride in her dress before the wedding. They like to have couples venture outside for what they call the "first look."

"We'll set it up so that the groom has his back to the bride, and it'll be just the two of them in an intimate setting, and she'll walk up to him and have their ‘first look.' We go ahead and capture that first expression," Allison says, smiling as she describes the set-up.

"It's great, but if you can take it and put your spin on it, then I think that's the best thing for it. And that's really the meaning behind the slogan ‘Despise the Ordinary,'" he says.

"We always tell our clients, when it comes to their weddings, anything they can do to put their personalities in it and make it about them is better."

Another way the Hudsons try to bring out personality at weddings is with their photo booth. While the photo booth is now available to rent for parties at http://www.rentthebooth.com, it used to be available exclusively to brides. "We wanted to give (brides) something special nobody else had," Adam says.

The photos from the booth capture the silly fun of weddings that traditional wedding photography generally doesn't. They range from a couple sneaking a loving kiss to a group of wedding attendants sticking out their tongues and making funny faces. The photos all add a personal touch to the wedding album. The Hudsons expect to have a new smaller booth with more features available soon for weddings and parties. And the Hudsons are now delving into senior portraits.

At the end of the day, the Hudsons care about capturing memories, whether that be high school or wedding day, and they're committed to understanding their clients' style and personality to do that.

"It's so important to know your photographer and be on the same page creatively, because when the wedding's all over, all you have left are those images," Adam says. "The flowers die. The cake gets eaten. And the dress gets boxed up, but the images are the only thing that last past the day."

Quick Facts
Adam uses Nikon digital, with a bit of film and Polaroid with help from the Impossible Project (the-impossible-project.com). But he claims: "I definitely don't think the equipment makes much of a difference. It's what's behind the camera that makes a difference. You can take any good photographer or any person that's creative and give them a small point-and-shoot, and as long as they can work it, they can definitely get something great out of it. I think it's more about the connection with the client and how you look at the world more than anything else."

• Wedding coverage starts at $2,000.
• The couple is available for travel.
• They only shoot one wedding per day.
• Some weddings book up to 12 months in advance.
• A non-refundable retainer and signed contract are required to reserve a date.
http://www.Adamhudsonphotography.com has examples of the studio's photography work. Information about renting a photo booth is at http://www.rentthebooth.com.

Great piece! It captures Adam & Allison's unique style, personality, and passion for their craft. They were my one and only choice of photographers for my upcoming wedding, both because their photos are stunning and because they truly get to know their clients personally. Thank goodness they decided that they'd be friends with me and my fiance and agreed to shoot our wedding!